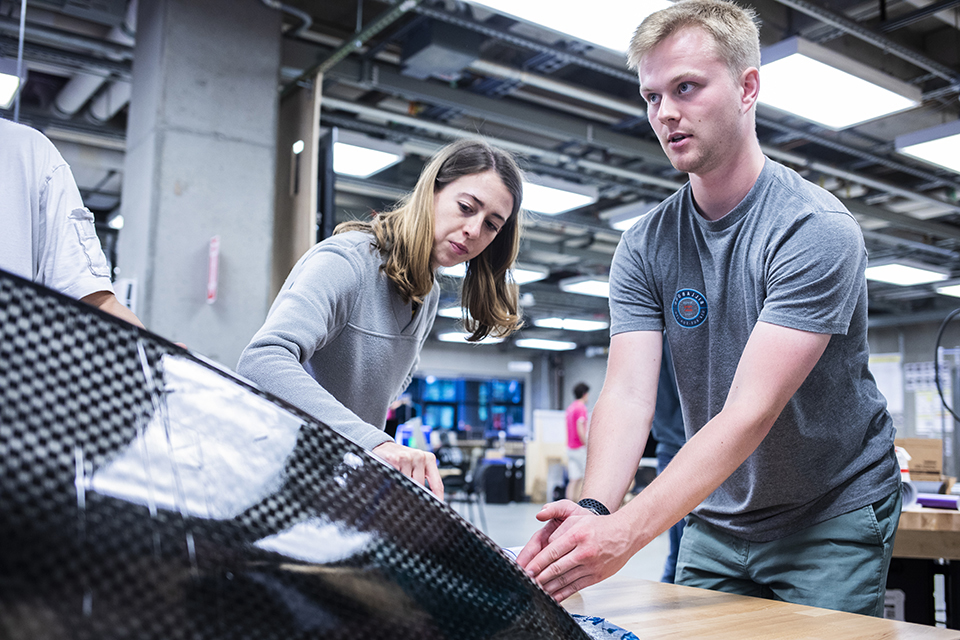 CEE junior Ethan Simcock and Industrial Design student Lulu McRoberts measure and visualize where sponsor and school decals should be placed on the fairing, the pod's exterior structure that increases performance by reducing drag.

When civil and environmental engineering junior Ethan Simcock first heard about the futuristic concept that aims to revolutionize high-speed travel, he knew there was only one thing to do: jump onboard.

“The whole concept is super exciting,” Simcock said. “Who wouldn’t want to get on a train and go from Seattle to Portland in 15 minutes? It’s a ton of fun to contribute to.” 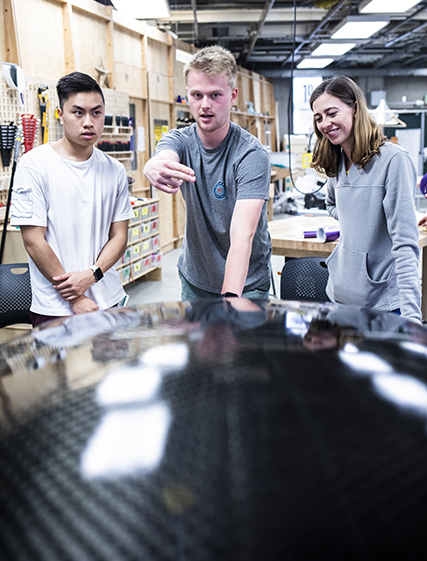 The only CEE student on the Washington Hyperloop Team, Simcock is one of four student directors working to ensure the success of this year’s team. Last year, the UW team placed first in the United States and fourth in the world.

“Civil and environmental engineering definitely shifts how I think of Hyperloop,” Simcock said. “I think about the implementation more and about how Hyperloop will change how society operates.”

Comprised of more than 30 students from various disciplines, the Hyperloop team is currently preparing for the fourth annual 2019 Hyperloop Pod Competition in July. Twenty-one teams from around the world will gather at SpaceX headquarters in California this summer, where they will be judged on one criteria only: How fast their self-propelled pod can travel down a mile-long vacuum tube without crashing.

Proposed by SpaceX CEO Elon Musk in 2013, the Hyperloop concept aims to revolutionize mass transit by transporting people in pods through vacuum tubes at speeds over 700mph. If successful, the idea could reduce travel time from San Francisco to Los Angeles from six hours to a mere 35 minutes, and from Seattle to Portland in 15 minutes.

As one of four student directors, Simcock assists with overall team management, making sure the subteams are making progress on various components of the larger pod, from propulsion to braking to power and control systems.

Simcock also oversaw the pod’s carbon composite shell this year, and the chassis of the pod last year, which are both engineered to be as lightweight as possible. Rather than use heavier metals, such as aluminum, this year’s team is focusing on designing the pod to be as light as possible. They are using more lightweight materials than ever before, from 3D printing to composite materials. This year’s pod is, in fact, about 40 percent lighter than last year’s design.

While the majority of his teammates are from the mechanical engineering discipline, Simcock has found the team to not only be a way to utilize his CEE skillset, but to expand his knowledge in related areas.

“The competition entails building and designing a pod, which is not inherently a civil engineering task, but it’s been super fun,” said Simcock, who plans to specialize in structural engineering. “I’ve learned a lot about structural analysis from a pod perspective. As a junior, I’m taking classes about how this same concept is applied to building bridges and other structures.” 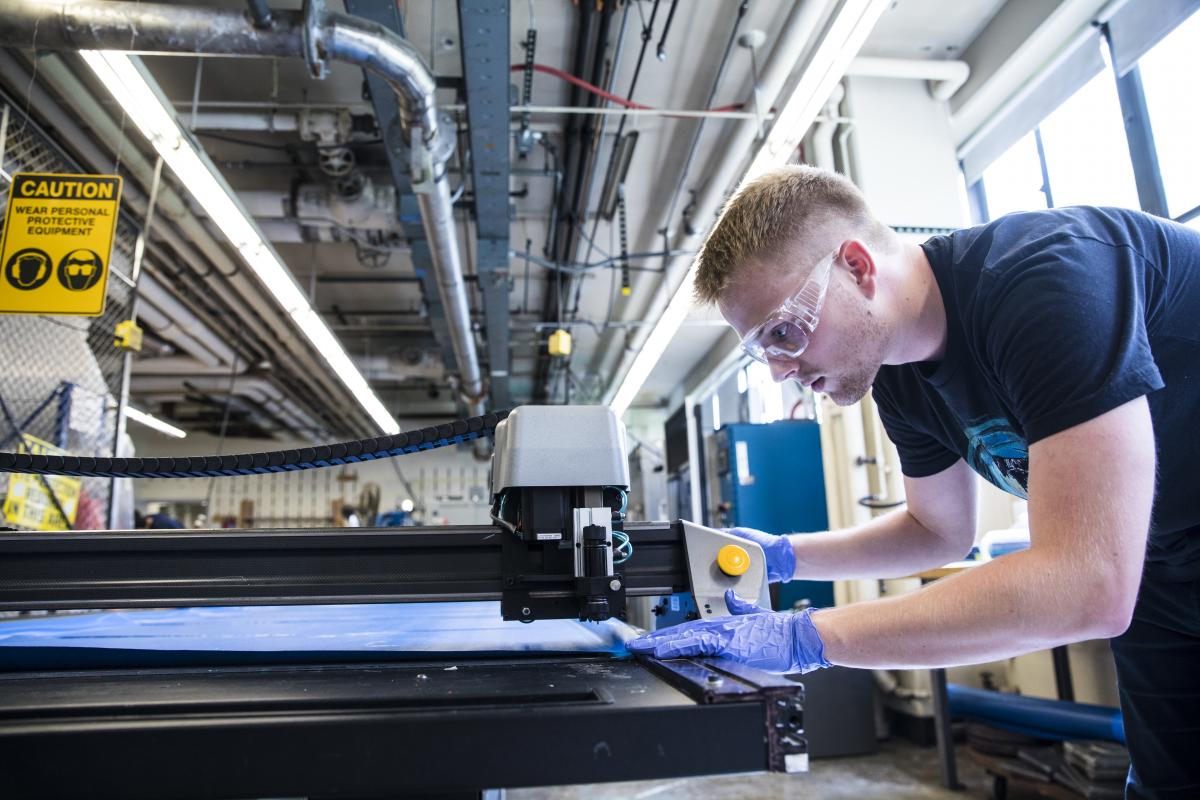 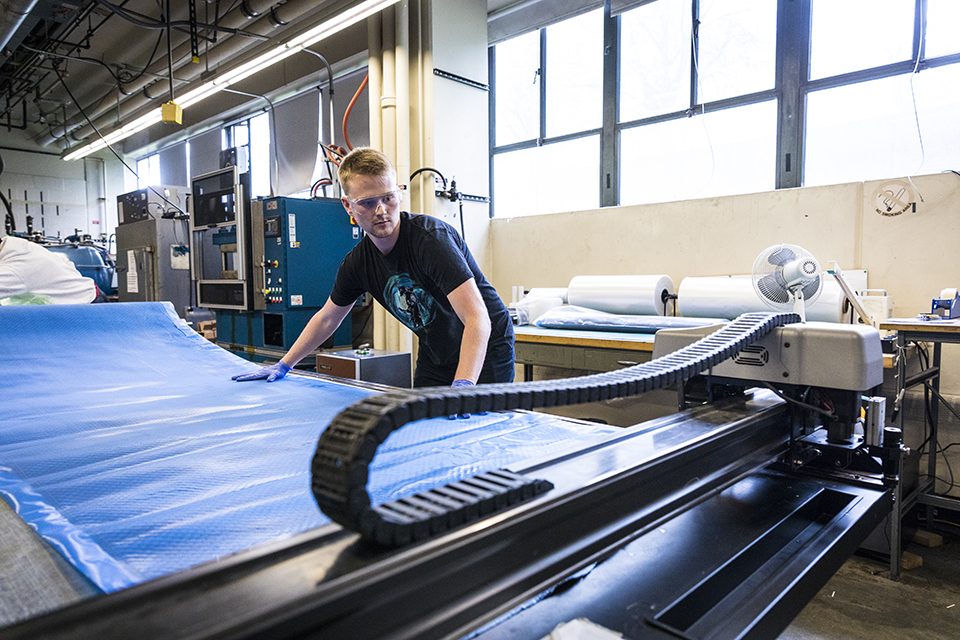 CEE junior Ethan Simcock spreads the roll of carbon fiber out on the fabric cutter before cutting.

The team’s goal this year is to create a pod that is not only reliable and safe, but is even faster than last year’s pod, which was designed to reach a top speed of 200 mph. After SpaceX limited the performance of the pod due to lack of time to complete adequate testing, the estimate is that the UW pod reached about 60 mph.

“We do a lot of conceptualizing right after the competition, then reflect on what we can do better, what hindered us,” Simcock said. “So for us this year, using roughly the same propulsive specs, the weight savings is huge.” 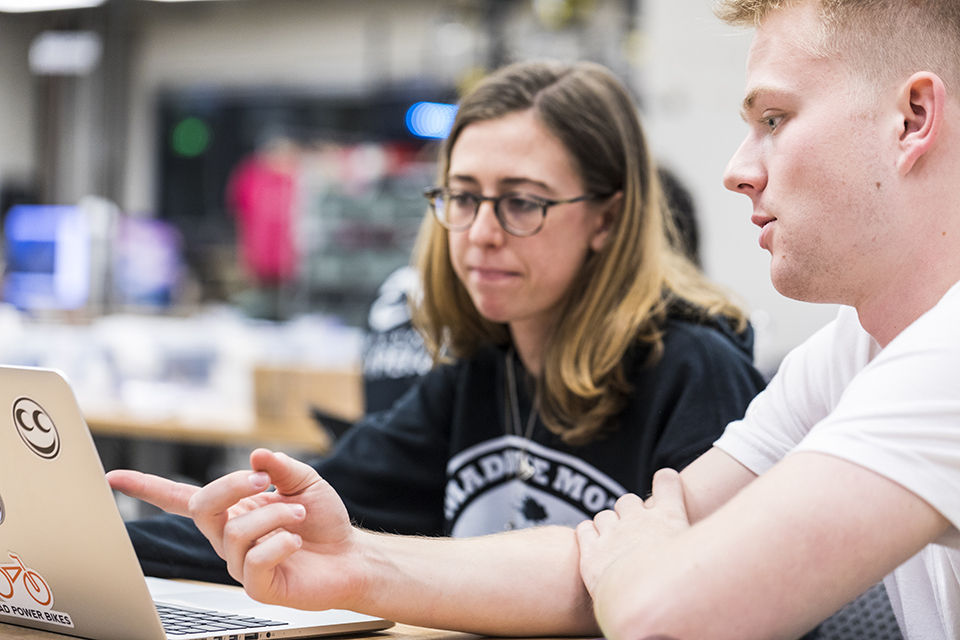 Designing and building a pod takes the full academic year. In fall quarter, the students focus on design, then in winter quarter the students undertake analysis and the start of manufacturing. In spring quarter, they start the testing and fine-tuning phase. Without access to a large-scale vacuum tube, or even a large outdoor subtrack to test the complete system, individual aspects of the pod are tested using student-built apparatuses.

Although the competition isn’t until July, the team will complete their pod by the end of spring quarter, as many team members head off to summer internships—often at SpaceX or Tesla. To showcase this year’s pod design to their many sponsors and supporters, the team held their annual “unveiling” event in May.

After months of hard work, the team members will reconvene at the competition. For Simcock, he’ll already be on site, as he returns to SpaceX again this summer for an internship. And perhaps one day soon, he will help design the infrastructure needed to make Hyperloop become a reality.

“I think we have the technology to do it and the engineering knowledge, the main thing that limits us in my opinion is building the infrastructure, the track and vacuum tube,” Simcock said. “That is a really big, whole other project in itself.” 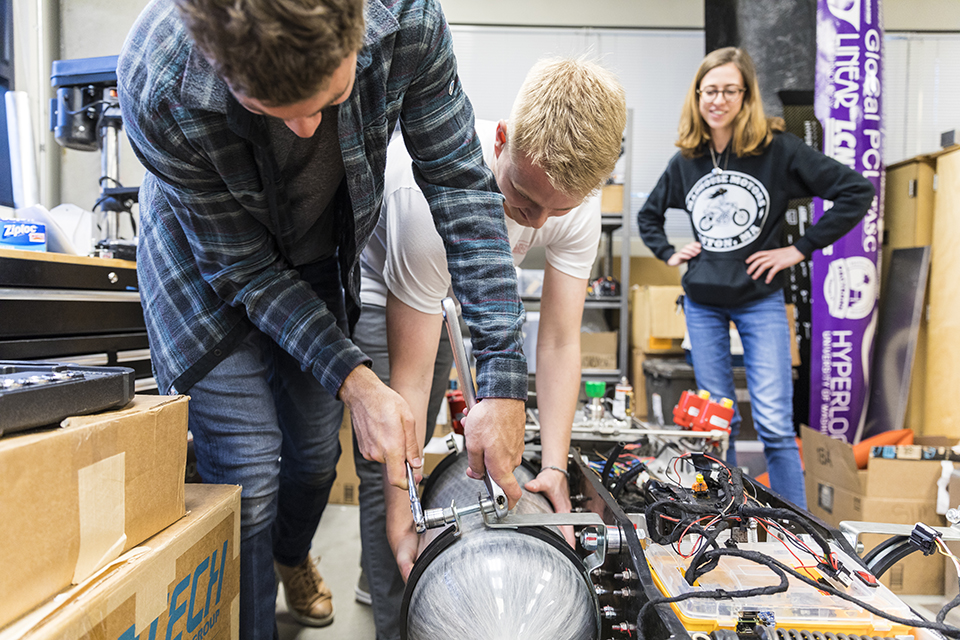