Delivering items by drone may be better for the environment than trucks in some instances, according to new research led by associate professor Anne Goodchild. But this only rings true when packages are lightweight, distances are short and there are few recipients on a delivery route.

While the idea of drone delivery is nothing new, very little research exists that examines the environmental implications of this futuristic delivery method. Although drone delivery for commercial operations is still heavily regulated in the United States, the Federal Aviation Administration has recently created legal space for experimenting with drone deliveries.

Goodchild, together with alumnus Jordan Toy, MSCE ’15, evaluated carbon dioxide emissions for both drone and truck delivery. While drones performed surprisingly well, considering that flight is very energy intensive, the researchers found that the carbon benefits of drones erode as the weight of a package increases and additional energy is required to stay aloft. 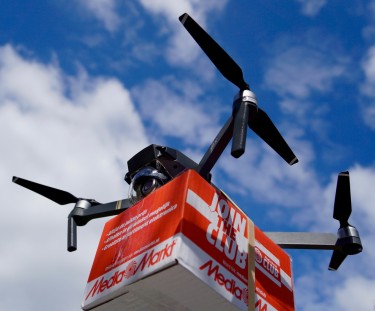 Drones therefore make environmental sense in certain situations, such as shorter trips in less densely developed areas, or in settings such as a campus or military base. For heavy packages and loads, and for delivery routes that have numerous stops or are farther away from a centralized warehouse, the researchers found that trucks performed better.

While it’s unlikely that drones will be used exclusively for delivery, according to Goodchild, a hybrid system may produce the least amount of carbon dioxide. A scenario encompassing this approach may be a truck delivering a load of packages to a specified location where a fleet of drones finishes distributing them in various directions.

The research was published in a paper in Transportation Research Part D.