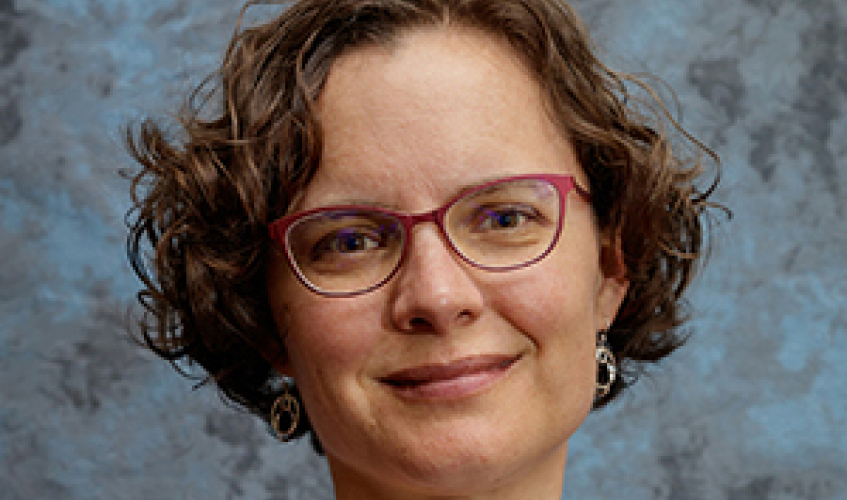 When it comes to food and water security challenges around the world, associate professor Rebecca Neumann doesn’t just watch from the sidelines. She heads to Bangladesh or Peru to conduct research and, more importantly, devise solutions.

In recognition of her work, Neumann was honored with the American Geophysical Union’s Charles S. Falkenberg Award in “recognition of an early- to middle-career scientist who has contributed to the quality of life, economic opportunities and stewardship of the planet through the use of Earth science information and to the public awareness of the importance of understanding our planet.”

“I first met Dr. Neumann in a muddy rice paddy field in Bangladesh in January 2006. She was initiating her Ph.D. thesis research. Ultimately, that research would produce multiple publications, including a seminal paper in Nature Geoscience,” said Roger Beckie, professor and head, University of British Columbia.

While earning her Ph.D. at Massachusetts Institute of Technology, Neumann first established herself for raising public awareness about critical issues while investigating a major health problem in Bangladesh: groundwater contaminated with arsenic. The shallow aquifers in Bangladesh, which provide drinking water for millions and irrigation water for innumerable rice fields, are severely contaminated with naturally occurring arsenic.

Neumann’s work advanced understanding of how land-surface modifications related to water resources management and agricultural development could affect groundwater arsenic concentrations by altering the movement of water and organic carbon through soils and aquifers. Organic carbon fuels the microbial reactions that mobilize arsenic off soils and sediments and into groundwater. As a result of her findings, as well as those of others working in the region, the government of Bangladesh now places drinking water wells at deeper depths and locates irrigation wells in separate, shallower areas of the aquifer, to prevent them from pulling arsenic contaminated groundwater or organic carbon down to deeper depths.

Building on her experience investigating contaminated groundwater, Neumann has also researched rice contaminated with arsenic by irrigation water in the Ganges Delta in Bangladesh. Together with colleagues, she recognized that the sheer volume of arsenic-laden water used for irrigation contributed to the problem. A large percentage of irrigation water leaves arsenic behind in rice field soils while not providing any benefit to the rice plants themselves. By reducing the volume of water, the arsenic levels in rice could therefore be reduced. As a result, Neumann advocated for waterproofing the earthen barriers or “bunds” surrounding rice fields.

More recently, Neumann has been involved in an interdisciplinary project to improve the health and living conditions of an impoverished floating community in the Peruvian Amazon. From cleaning contaminated water to improving food security, the researchers are implementing innovative interventions to enhance both the built and natural environments in the village. To reduce water contamination, Neumann is investigating the use of aquatic vegetation, particularly native water hyacinths, to remove E. coli from the water.

“She works on very difficult problems that require her to be very transdisciplinary, do challenging field work, lab work and modeling and frequently visit difficult places,” said professor Faisal Hossain, who nominated Neumann for the award. “To me, she is a true warrior fighting for the well-being of the public using science and engineering skills.”