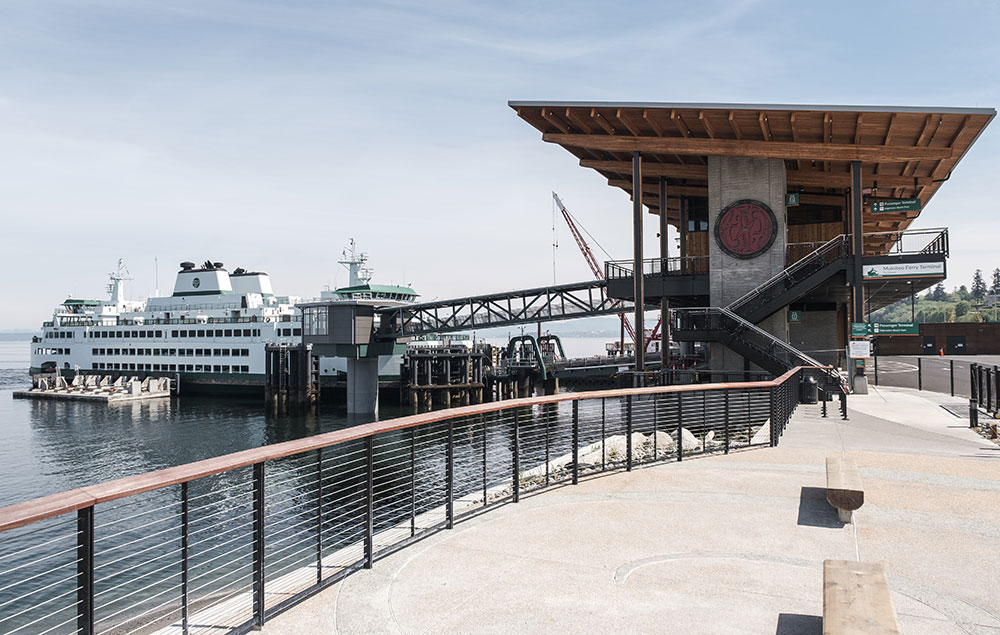 A bumpy journey turned to smoother sailing after engineers decided to utilize research from CEE’s Structural Research Laboratory when designing the wharf for the new Mukilteo Ferry Terminal, which opened to the public in December 2020.

One of the busiest ferry routes in the state, with more than four million riders per year, the Mukilteo Ferry Terminal connects Whidbey Island to the greater Seattle metropolitan area. The ageing terminal, built along the shore of Possession Sound, hadn’t seen improvements since the 1980s and suffered from operational deficiencies, the inability to accommodate future growth and, perhaps most importantly, failed to meet standards for seismic safety.

“The old site would not have performed very well during a seismic event, with old timber piles not embedded very deeply. There would have been a lot of damage and it would probably not have been repairable,” says CEE alumnus Dan Alire (MSCE ’02), who led the project for Washington State Ferries (WSF) while employed at KPFF Consulting Engineers. 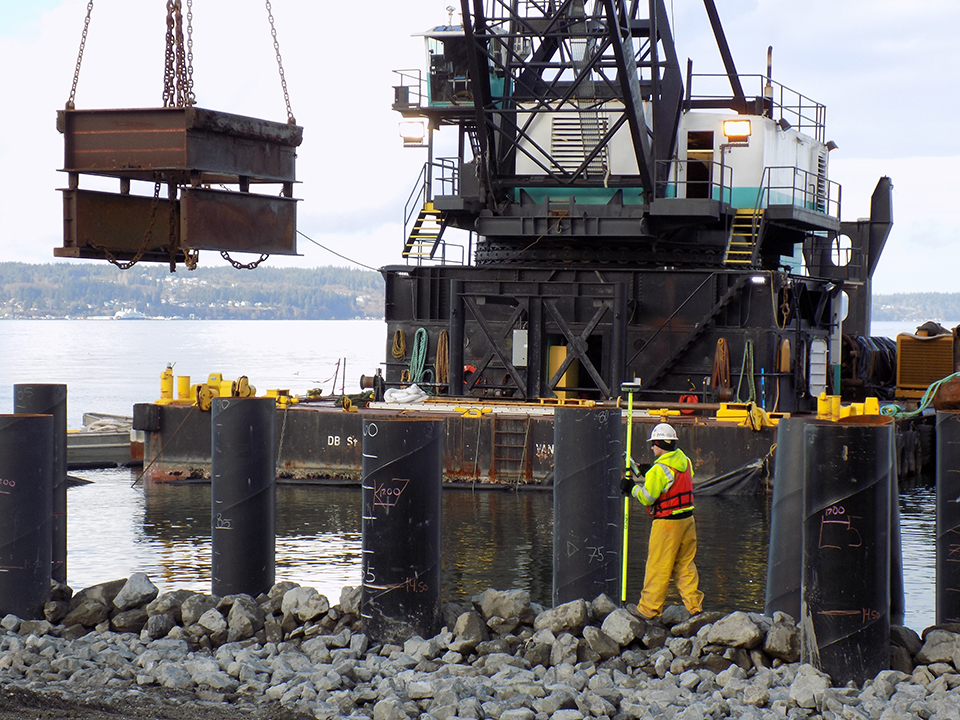 During the first phase of construction, 55 hollow steel piles were installed, which were filled with concrete.

“The liquefied soils are fairly deep, and a non-liquefiable soil layer rests on top,” Alire says. “If an earthquake liquefied the deep soil, the non-liquefied crust would push against the wharf and try to drive it into the water with immense force.”

Typical wharf construction relies on piles driven into the earth and a horizontal concrete slab structure resting on top, with a connection between the two acting like a hinge. However, the engineers’ analysis indicated that during a seismic event this solution would result in excessive movements of up to seven feet, which would impact the overall stability of the structure. The design team explored several other options, but they all presented unique challenges and costs.

After learning about research in CEE’s Structural Research Laboratory that sounded promising, Alire reached out to CEE researchers to explore using concrete-filled steel tubes (CFSTs). Although the Washington State Department of Transportation (WSDOT), which oversees WSF, has utilized CFSTs in a handful of construction projects during the past decade, this would be their first time using them for a wharf structure.

As the name implies, CFSTs are steel tubes that are filled with concrete. A type of structural frame system, CFSTs offer considerably higher strength and stiffness when compared to other pile designs that are commonly used in building foundations. 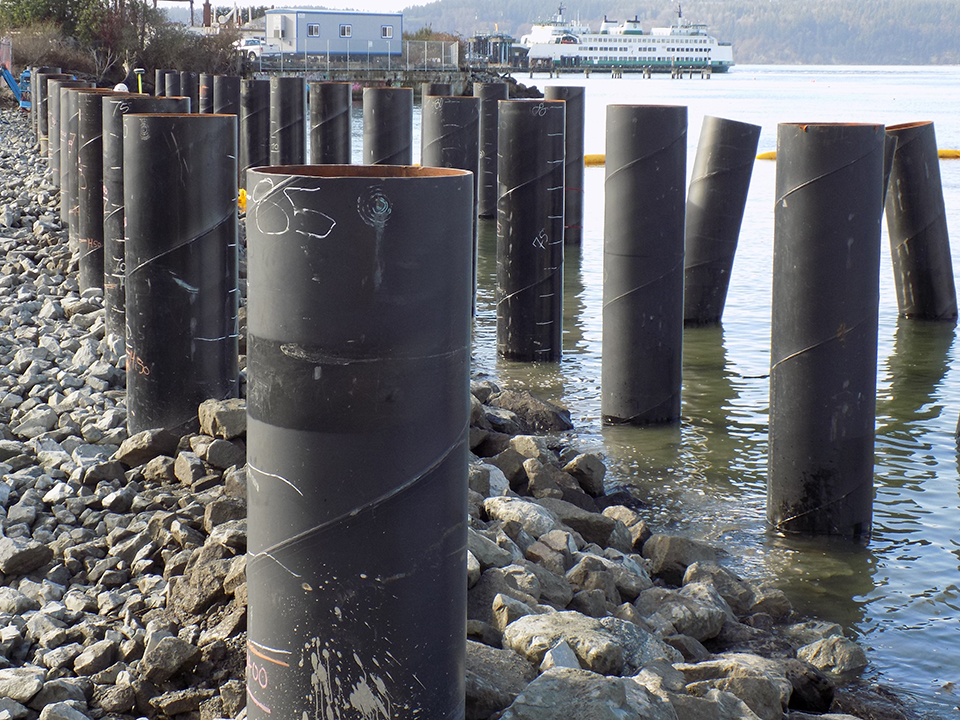 The concrete-filled steel tubes serve as a support structure for the terminal, which includes the passenger building and vehicle transfer span.

“CFSTs were very suitable for this project,” says Professor Emeritus Charles Roeder who has researched CFSTs together with professor Dawn Lehman for the past 20 years. “They have two to three times the shear strength of a reinforced concrete shaft of the same size.”

Although they are widely used in countries throughout Asia and Australia, CFSTs are not often utilized in the United States, says Roeder, which is largely due to issues related to connecting the CFSTs to the rest of the frame system.

Working together with the UW researchers, the Mukilteo Ferry Terminal engineering team developed a system that paired CFSTs with a connection called a fixed pile head, the stiffness of which is around four times greater than other more commonly used connections. The combination resulted in enough strength to control the anticipated movement of the wharf during a seismic event.

“We did some preliminary studies and the results were that the structure went from several feet of movement to about a foot or less,” Alire says. 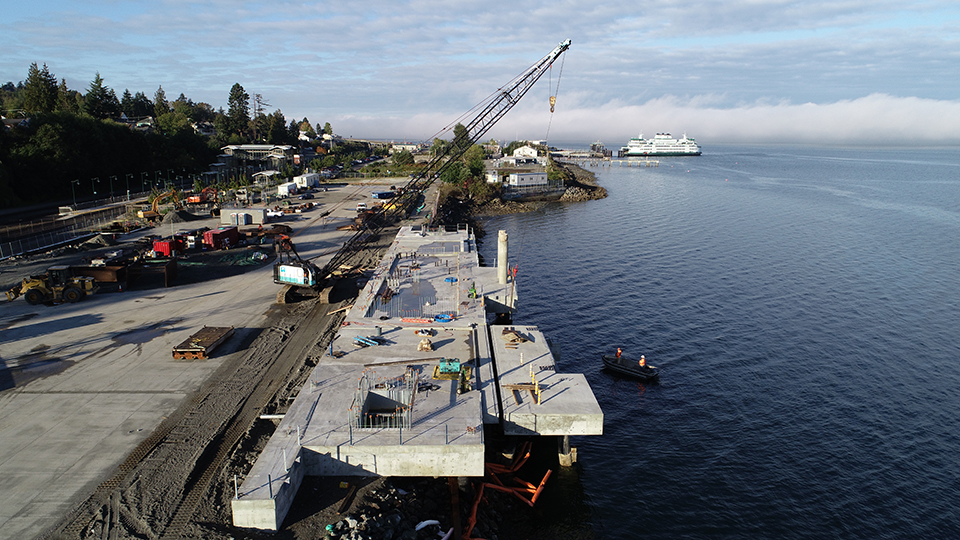 From concept to construction

The process to implement the research entailed taking ownership of the concept and performing due diligence, says Alire. This involved tailoring the research concept to the needs and constraints of the project and working through technical questions with WSDOT’s structural engineer, alumnus Geoff Swett (MSCE ’98).

“Taking something from research to practice, a translation has to happen. There are steps in between that relate to due diligence, risk, and identifying constructability and how a contractor will build it,” Alire says. “The research gave us a great solid start to find a suitable solution that was experimentally substantiated.”