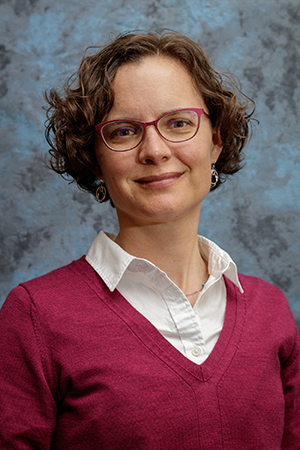 Becca leads the hydro-biogeochemistry research group in the Civil and Environmental Engineering Department at University of Washington. She joined UW in 2011. Prior to 2011, she was a NOAA Climate and Global Change postdoctoral fellow at Harvard University where she studied how plant roots and soil conditions modulate the amount of water moved through the landscape. She obtained her Ph.D. from the Massachusetts Institute of Technology with a thesis project focused on understanding one of the major human health problems in Bangladesh: arsenic contaminated groundwater. Prior to graduate school, Becca worked as an environmental engineering consultant for EG&G Technical Services, and received her B.S. in Civil and Environmental Engineering and B.A. in Art and Art History from Rice University. Outside of work, Becca enjoys hiking, mountaineering and rock climbing with her husband and two kids.

The hydro-biogeochemistry research group is revealing how physical, chemical and biological factors interact in soils, aquifers and surface water to control chemical fate and transport. We aim to inform development of management and policy decisions that protect human and environmental health. Thus we tackle societally relevant topics, such as food and water quality and global climate change. Recognizing the complexity of environmental systems, we take a multifaceted approach. We harness knowledge and techniques from multiple disciplines, including hydrology, limnology, aquatic chemistry, soil science, plant ecophysiology, and microbial ecology, and we use a combination of observational, experimental and computational methods to examine processes that occur at multiple spatial scales. We work across the micro-meter scale of microbes, to the centimeter scale of plant roots, up to the kilometer scale of field sites.


Because the world is getting warmer, permanently frozen ground around the arctic, known as permafrost, is thawing. When permafrost thaws, the ground collapses and sinks. Often a wetland forms within the collapsed area. Conversion of permanently frozen landscapes to wetlands changes the exchange of greenhouse gases between the land and atmosphere, which impacts global temperatures. Wetlands release methane into the atmosphere. Methane is a potent greenhouse gas. The ability of methane to warm the Earth is 32 times stronger than that of carbon dioxide over a period of 100 years. We are studying how wetland plants and climate variables, like rainfall, affect emission of methane from permafrost thaw bogs. We conduct fieldwork at thaw bogs in Interior Alaska and we test mechanisms and hypotheses using plant-growth and other laboratory-based experiments. The project is broadly focused on advancing understanding of how permafrost landscapes in Northern latitudes affect and are affected by climate change.


In the Puget Sound region, lakebed sediments are contaminated with arsenic emitted from the former Tacoma copper smelter (shut down in 1985) and they now act as a long-term source of arsenic to surface water and animals living in the lakes. As part of the UW Superfund Research Program, we are investigating the mobility, bioaccumulation and ecological toxicity of arsenic within these impacted urban lakes. The contamination affected lakes with different mixing regimes and we have detected arsenic in the waters of both shallow unstratified lakes and deep seasonally stratified lakes. Our specific aims are to:

These efforts will establish the human and ecological health-threat posed by arsenic contamination, and will provide information needed to revise arsenic water-quality guidelines, which are under review.


The lack of a single micronutrient (zinc) and presence of a single toxin (arsenic) in rice grain adversely impact the health of hundreds of millions of people. We are working to understand connections between climate conditions and concentrations of arsenic and zinc in rice gain. Climate change is expected to decrease rice yields, but its impact on the nutritional quality of rice grain is unknown. While human health depends on having enough food to eat, the nutritional quality of the food is equally important, particularly in developing countries where grain is the primary food source. Grain elemental composition depends on plant access to and uptake of elements from soil, and on translocation of these elements to grain. Availability, uptake and translocation of arsenic and zinc in rice plants are all punitively sensitive to climate conditions.


Rice, a staple food of more than four billion people, can also serve as a primary route of human exposure to methylmercury (MeHg). This bioaccumulative neurotoxicant can cause adverse effects even at trace levels, making MeHg contamination of rice a global public health concern. Methylmercury in rice grain originates from the paddy soil, where it is both microbially formed from inorganic mercury (methylated) and degraded back to inorganic mercury (demethylated). There is evidence that the release of oxygen and labile organic carbon from plant roots can affect both methylation and demethylation, suggesting that selection of rice cultivars with optimal rates of these processes could be a management tool for reducing MeHg contamination of rice grain. However, this management approach requires better understanding of how root oxygen loss and root carbon exudation affect the integrated balance of Hg methylation and demethylation.

We are growing rice in the lab to 1) assess the relative importance of Hg methylation and demethylation to the total accumulation of MeHg in rice soils, and 2) determine the relative importance of organic carbon and oxygen supplied by roots on rates of methylation and demethylation. Our work has direct societal relevance due to its focus on rice, a staple food, and holds potential to inform agricultural strategies that minimize MeHg contamination of rice grain.


The Mekong River connects China, Burma, Lao PDR, Thailand, Cambodia, and Viet Nam. Monsoon rains control surface water availability and seasonal flooding, which in turn support rice production for export and fishery productivity. More than 60 million people in the Mekong River Basin depend on wild-caught fish and small-scale rice production for their livelihoods. Massive changes on the river, including active and planned hydropower development, are at once crucial to the region’s economic prosperity and a threat to the fisheries and agriculture that depend on the natural floods.

Our goal is to develop a full understanding of how food quantity and quality are connected and influenced by upstream hydropower development and climate change in a critical rice growing area – the Tonle Sap Lake in Cambodia. Rice production is a crucial subsistence and economic activity. In seasonally inundated areas like the Tonle Sap, rice growing depends on wet-season flooding, which has and will continue to be dramatically altered by hydropower development in the Mekong River Basin. Comprehensive water management modeling and forecasts of changes in rice production (quantity and quality) under new hydrology are critical components of food security and water resource decision-making. To address our goal, we are interviewing farmers about field management decisions and seasonal cropping patterns, tracking rice yields, and measuring contaminant and micronutrient content of soil and rice grain collected from different locations through the Tonle Sap basin during different cropping seasons. These data will be used to develop a rice production and nutrient model for the Tonle Sap that we will use to investigate how forecasted hydropower-influenced flood patterns and future climate conditions will alter rice quantity and quality.

Our efforts are part of a larger multi-institutional and multi-disciplinary effort to sustain the socioecological Food- Energy-Water Systems in the lower Mekong River Basin.

After analyzing the human health risks of eating aquatic organisms from arsenic-contaminated urban lakes in the Puget Sound lowlands, UW researchers have a menu of concerns.

Warmer temperatures expected under most climate change projections can lead to higher concentrations of arsenic in rice, according to a new study by researchers including CEE faculty Rebecca Neumann and Stuart Strand.

Thirty years after the ASARCO copper smelter shut down, UW researchers make surprising discoveries about which lakes in the Tacoma area are most impacted by legacy arsenic contamination.