The E-Defense shake table is the largest in the world.

Looks can be misleading, especially after an earthquake. Many buildings still stand tall, but this doesn’t mean they are structurally safe or can be quickly and inexpensively repaired.

“Even if a building is standing, we want to know if it’s safe to go inside and operate in the vicinity of the building, or if it’s economical to fix,” says principal investigator and assistant professor Paolo Calvi. “We need better tools that can help us decide what to do.”

Largest shake table in the world

Full-scale shake table testing is rare, as not only are the tests expensive, but facilities are few in number. Located in Miki, Japan, just north of Kobe, the Earth Defense (E-Defense) earthquake simulator is the largest indoor shake table in the world and is capable of simulating high-level ground motions up to magnitude 7. Completed in 2005, the facility was built following the devastating 6.8 magnitude Hyogoken Nanbu (Kobe) earthquake in 1995.

In the aftermath of earthquakes, assessing the structural integrity of reinforced concrete buildings, which make up as much as 70% of the built environment, persists as a significant problem in the United States and around the world. Except for single-family homes, the majority of buildings are constructed from reinforced concrete, including high-rise office and residential buildings as well as critical structures such as hospitals and schools.

Newer data collection and analysis methods that promise to enhance both precision and speed of damage assessment require validation and fine-tuning before they can be employed in the field. To help advance these methods, UW CEE researchers joined forces with researchers from the University of Nevada, Reno (UNR) and multiple Japanese universities led by the University of Tokyo to work on the “Japan-U.S. Collaboration on the Seismic Performance of Reinforced Concrete Structures” project. 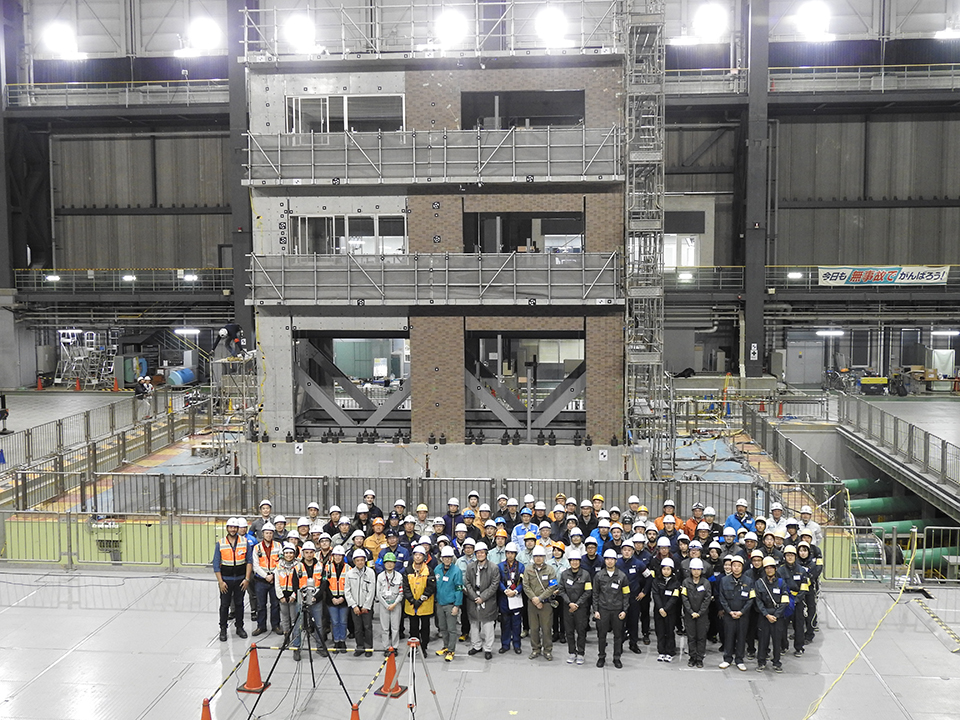 On the last day of the shake table testing, researchers from the United States and Japan gather for a group photo.

By working to advance the post-earthquake assessment of reinforced concrete buildings, the researchers hope to make a significant contribution toward improving damage assessment for concrete buildings throughout the world. In addition to reduced risk and downtime posed by damaged buildings, policymakers will be able to better determine if buildings are economical to repair.

In addition to introducing more efficient data collection methods through the use of technology, the researchers are also working to improve data interpretation by moving toward analysis based in mechanics, rather than observation-based methods. Up until now, it has been difficult to evaluate newer analysis methods due to a lack of reliable baseline information about the performance of reinforced concrete buildings.

To address this challenge, the researchers gathered precise baseline data in a controlled environment while subjecting a full-scale three-story reinforced concrete frame building to three levels of increasing ground shaking intensity at the E-Defense shake table facility in Japan. While researchers from Japan conducted tests using traditional instrumentation, UW and UNR researchers collected redundant data using newer technologies, which they will compare to the baseline data.

“This project provides an opportunity to compare the accuracy and efficiency with which these methods can be used to detect, quantify and document damage,” says Lowes. 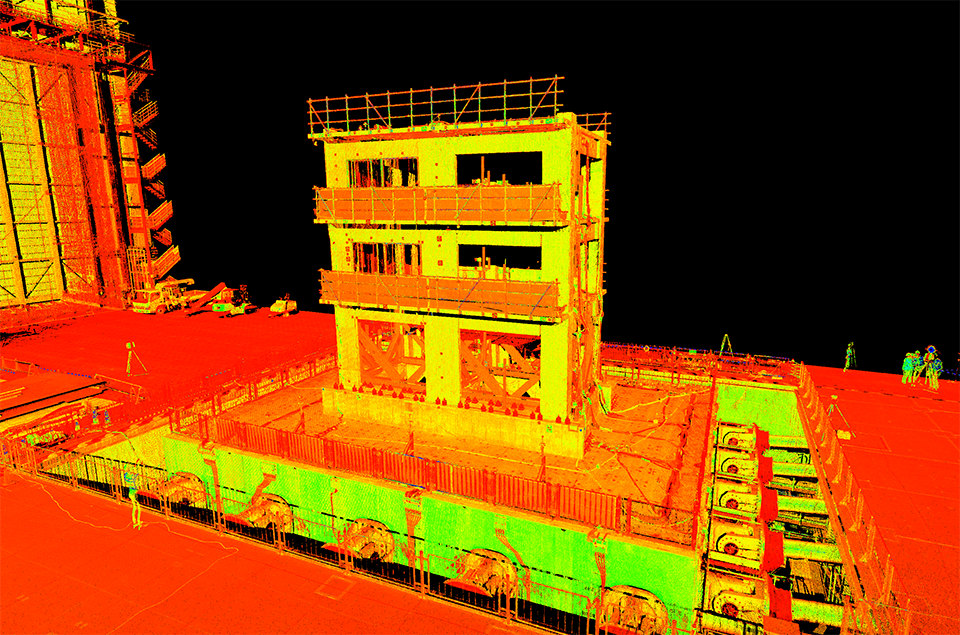 During the shake table testing, the researchers tested new technology, including lidar, which was used to generate 3D point cloud images of the building before and after each shake table test, enabling them to calculate building displacements and deformations. 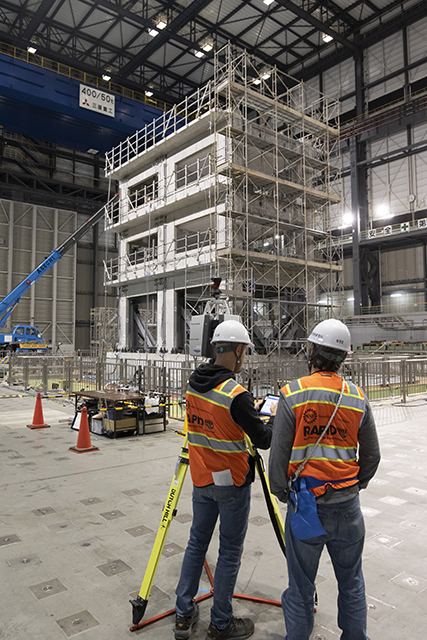 State-of-the-art data collection tools, including lidar, were available to the researchers during the shake table testing, thanks to a partnership with CEE’s Natural Hazards Reconnaissance Facility (known as “RAPID”), which houses state-of-the art equipment to support the collection of perishable data following natural disasters.

“One thing that is unique about this project is that for the first time we used lidar to detect damaged features in a concrete building after a simulated earthquake,” Calvi says.

Known for precision, lidar data was used to generate 3D point cloud images of the building specimen before and after each shake table test, enabling the researchers to calculate building displacements and deformations.

“The measurements are more objective and obtained more quickly and efficiently,” Calvi says. “One person operates both scanners, as opposed to having experts running around the building taking measurements manually.”

Another new method that the researchers tested is under development by UNR and involves using high-resolution digital image correlation (DIC) monitoring equipment, which measures structural deformations by comparing images taken at various intervals throughout specimen testing.

Responding to natural disasters around the world, the RAPID facility completes first year of operations.

“DIC, like lidar, is a relatively new technology and it is still under development,” Calvi says. “The goal is to use it in the field, in conjunction with lidar, once we develop it to the point that it can be accurate and efficient.”

Through the partnership with the RAPID center, the researchers will archive and share their data with the larger research community.

As they analyze data from the shake table testing, the researchers are planning for the next phase of the project. Once NSF-funded travel is reinstated after being suspended due to COVID-19, the researchers hope to test the new analysis methods and technology on structures damaged after the 6.4 earthquake in Puerto Rico in January 2019. This would be a first step toward one day implementing newer assessment methods in the field.

“Our current work was simulated, but we plan to do the same thing with real buildings after a real earthquake,” Calvi says. “We care about life safety and the financial aspect of earthquakes — we want to make sure buildings are functional and there isn’t too much downtime after an earthquake.”