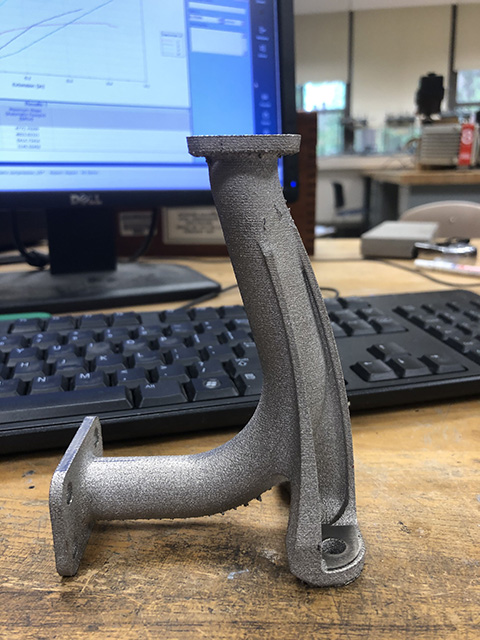 By the end of the quarter, the students successfully developed a fluid transport bracket using a relatively new manufacturing approach, the 3D printing of titanium.

Six students from CEE, Mechanical Engineering and Materials Science & Engineering participated in the Fusion Bracket Capstone project, led by assistant professor Richard Wiebe. The students were tasked with designing, fabricating and testing a fluid transport bracket that was capable of supporting significant structural load while adhering to specific space constraints.

“The project mimics many real-world structures problems in which a structure may have multiple functions (in this case fluid transport while also carrying structural loads), with certain constraints placed on where the structure may and may not pass through,” says Wiebe.

Due to the COVID-19 outbreak and the transition to online learning, the students met frequently online throughout the quarter and also held online meetings with mentors from Boeing, who provided feedback on their designs.

“The team handled the pandemic situation really well. All meetings moved online, but they still did a great job of staying on top of things as a team,” says Wiebe.

An important component of the project was that it involved 3D-printing of titanium, which is a relatively new manufacturing approach. This type of additive manufacturing also allows for the fabrication of structures with complex geometries that would otherwise be too time consuming and expensive to build. In order to print demonstration pieces throughout the project, one student volunteered to take a 3D printer from the lab to his home. Due to lab closures, the students were unable to complete the fabrication and testing themselves. Instead, they hired a TA to fabricate and perform testing on campus. 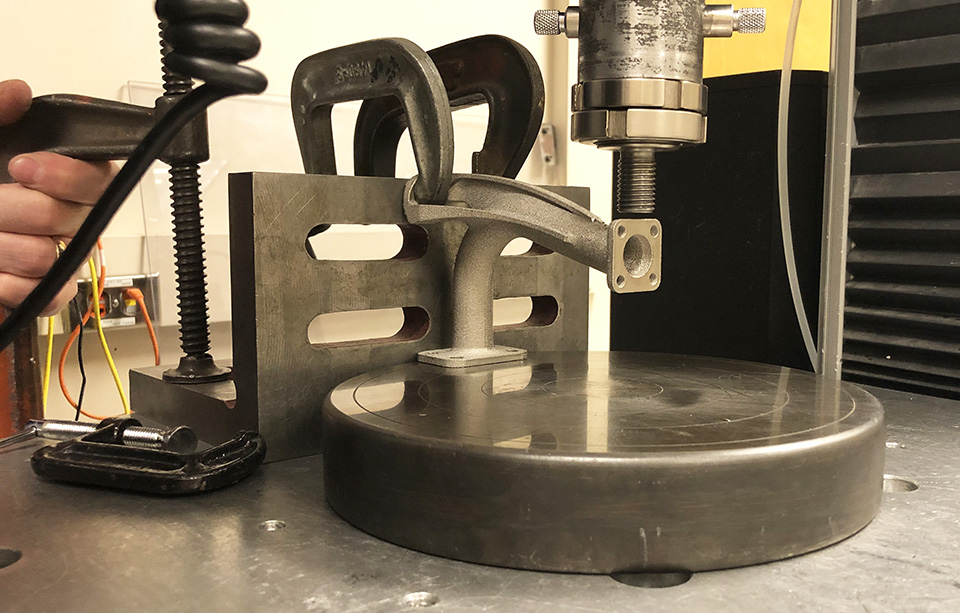 A TA tests the fluid transport bracket to make sure it meets design goals, since the students were not able to perform testing on campus.

“The students would also occasionally swap materials and parts with the TA. This swap was done as it was recognized that it was helpful for the team members to get their hands on real printed parts. Seeing it in real life does a lot to help visualization,” Wiebe says.

Drawing upon skillsets from three different facets of engineering, the project allowed the civil engineering students to hone their structural analysis skills with a real-world project.

“All civil members had an emphasis in structures for their degrees,” says CEE undergraduate Hanna Wells. “The interdisciplinary aspect of the project highlighted a shift with Boeing and other companies using multi/interdisciplinary teams.”

By the end of the quarter, the students successfully developed a fluid transport bracket using titanium, which was structurally tested to ensure it met the design goals.

“One of the additional goals was that the part should look cool to show off the power of additive manufacturing – it certainly did that,” Wiebe says.