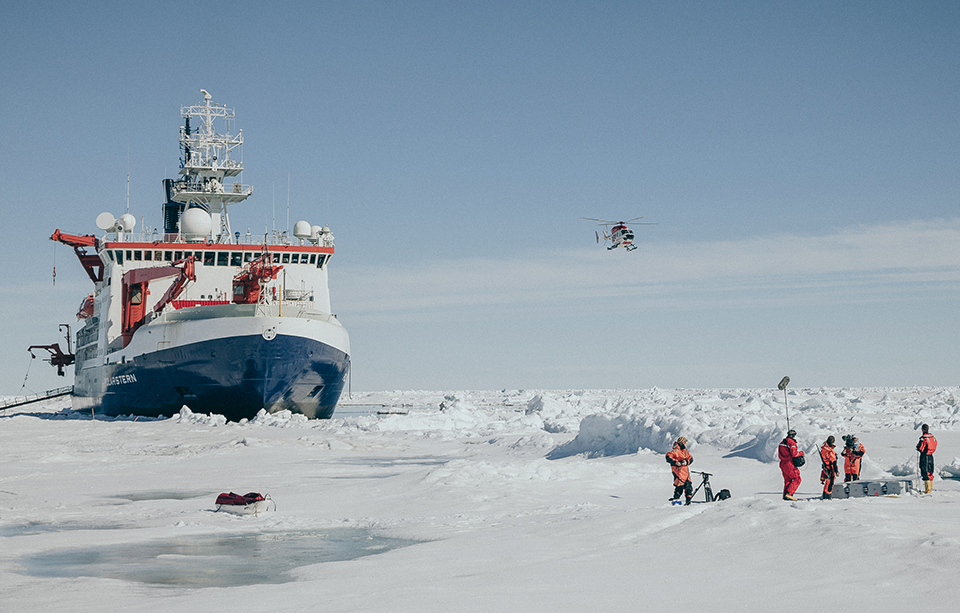 With a helicopter overhead, researchers prepare to make measurements in open water areas. Measurements on the ice near the ship are often coordinated with aerial surveys. Photo credit: Evgenii Salganik

Not many people can say they’ve had Arctic sea ice as their backyard for an extended period of time. But CEE alumna and UW Applied Physics Lab postdoc Madison Smith (Ph.D. ’19) can describe the experience. 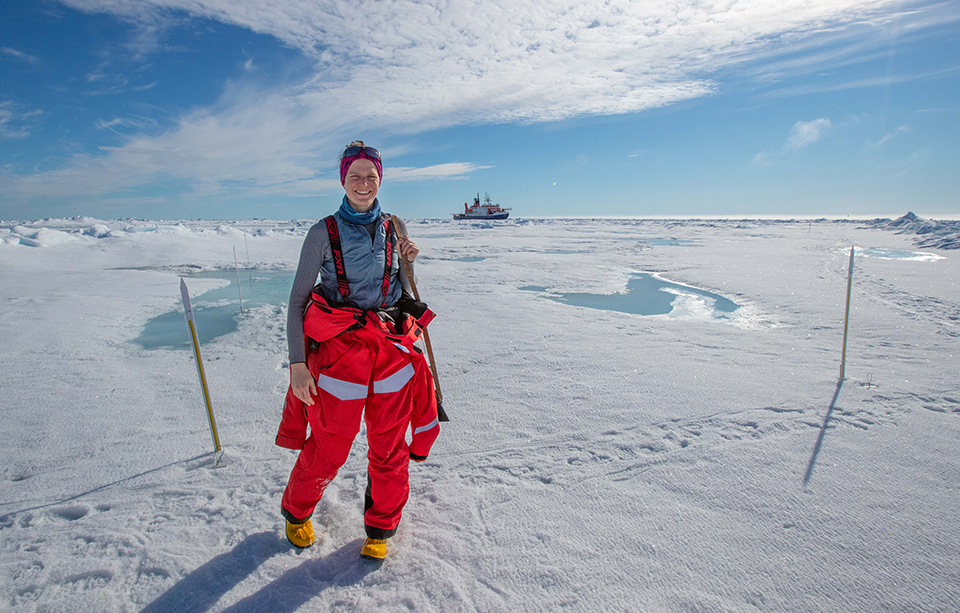 Members of the expedition take turns on “bear-guard” duty to keep watch for polar bears while scientists work on the ice. Here, CEE alumna Madison Smith is acting as bear-guard at the site of stakes used to measure the rate of melt at the top and bottom of the ice. Photo credit: Lianna Nixon

“I’ve been to the Arctic before, but something unique during this experience was getting to stay on the same ice and seeing the daily changes, similar to how you might see your backyard or neighborhood park,” says Smith, who returned to Seattle in late August after four months overseas. “Seeing the changes over the seasons was a special experience.”

For nearly three months, Smith conducted research aboard the German icebreaker Polarstern as part of the MOSAiC expedition, the largest polar expedition in history. Led by the Alfred Wegener Institute’s Helmholtz Centre for Polar and Marine Research, the year-long expedition started in September 2019 when the Polarstern set sail from Tromsø, Norway. The vessel returned to shore on October 12, 2020. 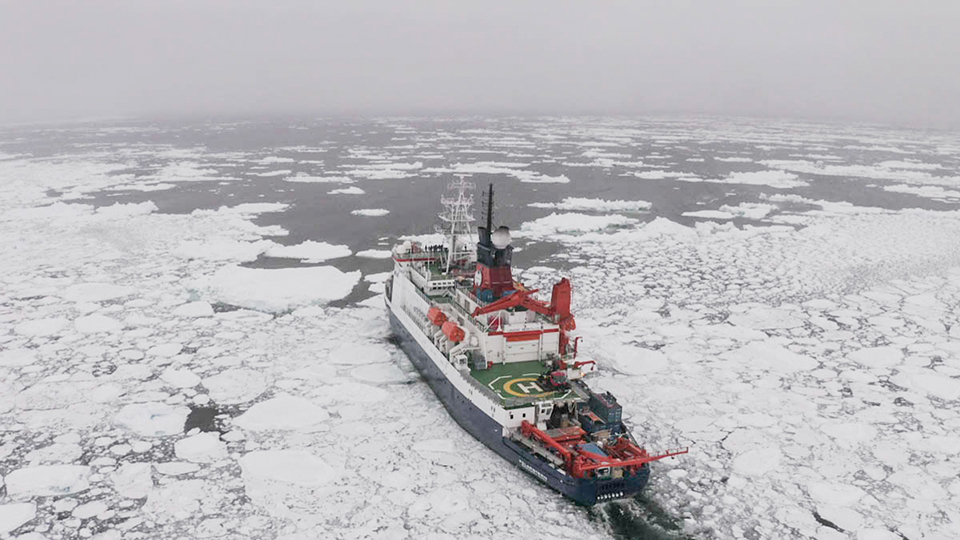 By design, the ship was intentionally trapped in sea ice in the Central Arctic for most of the expedition, becoming a drifting research platform from which researchers set-up a complex network of measuring stations on the surrounding ice. The international collaboration involved more than 300 scientists from 20 countries who shared the same goal: to advance climate change research.

As a postdoctoral researcher in UW’s Applied Physics Laboratory, Smith became involved in the expedition through her work with principal physicist Bonnie Light. MOSAiC comprised numerous independently funded research projects, for which researchers received endorsement for space on the ship.

“People have talked about MOSAiC for years, and I was interested in being part of it,” Smith says. “I ended up being the primary representative for our project during the summer. It was a lot more responsibility, but I learned so many things.”

On board the Polarstern

Joining the fourth leg of the expedition, Smith arrived aboard the Polarstern in June after completing a mandatory two-week quarantine in Germany. Designed as a research vessel, the ship housed a variety of labs, a lecture room and other scientific workspaces.

“The ship was like a little city, with 100 people on board,” Smith says. “The evenings were busy with packing up gear for the next day, downloading data and having meetings about what we wanted to do — it was a very busy couple of months.”

Once on board, the incoming researchers trained with scientists from the previous leg of the expedition to get up-to-speed on data gathering procedures. Collecting continuous datasets to monitor seasonal changes throughout the year-long expedition was an important component of the overall research mission.

Scientists from many different research teams observe the open water area (called a lead) before starting measurements. Observations in water showed accumulation of fresh, warm water directly near the surface, which impacts many processes including melt of the ice, growth of biology and interactions with the atmosphere. Photo credit: Antonia Immerz 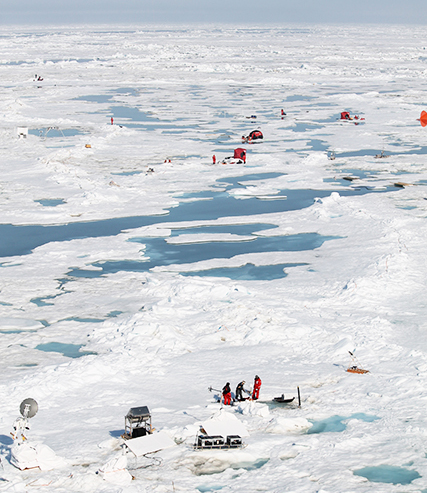 The view from the bridge of the Polarstern. Instruments used to observe the sea ice properties are in the foreground, with instruments measuring atmosphere and ocean properties further afield. The blue “melt ponds” seen all over the ice are characteristic of the late summer melt season. Photo credit: Madison Smith

A member of the sea ice team, Smith collaborated with 13 other scientists to collect measurements for continuous datasets and also gathered data for her own research. The majority of each day was spent on the large pack of floating ice adjacent to the ship, where researchers took various measurements.

For her sea ice research, Smith studied how sunlight is reflected, transmitted and absorbed by the melting ice cover and surrounding ocean. With ice becoming thinner, increased absorption of sunlight may be a substantial contributor to the warming of the ocean.

“The white ice stays much cooler and the water is getting warmer, so we are trying to understand how this varies,” Smith says.

To determine how much heat was absorbed in the open water around the ice, Smith took regular temperature measurements and monitored contributing factors, such as the salinity of the ocean. She also measured the albedo, which indicates how much sunlight is being reflected by the ice.

One surprising finding was that the sea ice around the ship contained a considerable amount of sediment, which accumulates on top of the ice during the warmer summer months as the ice melts away. The sediment could play a role in how much sunlight is reflect or absorbed by the ice.

“It was interesting to see how the ice had dirt and rocks on top and how the albedo was different,” Smith says. “That will be something really meaningful to contribute to our understanding of the Arctic. It may play a relatively significant role in how sea ice melt plays out and might change some of our predictions for Arctic sea ice in certain areas.” 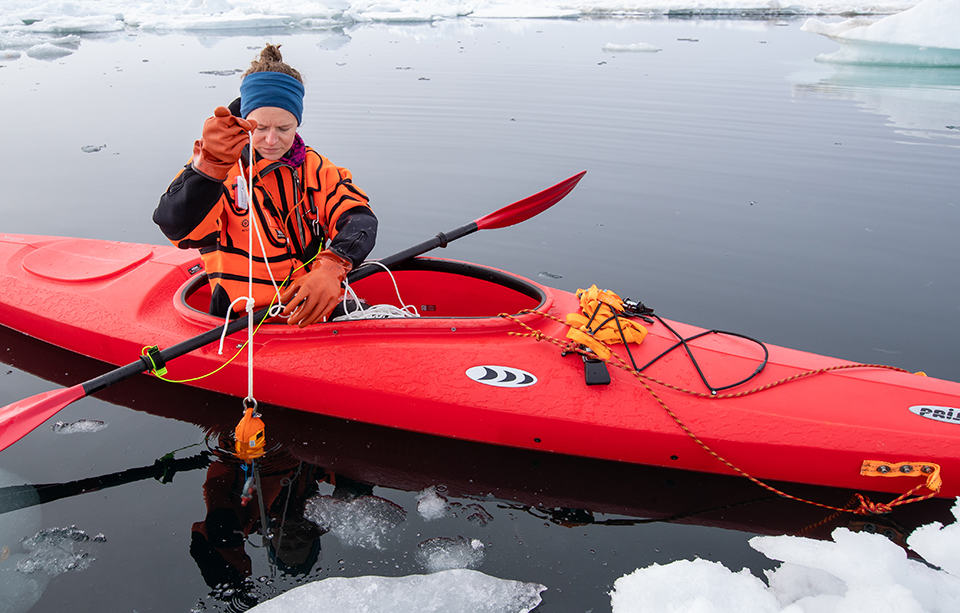 Kayaks provide a stable and mobile platform for taking regular measurements of the heat and salt in open water around the sea ice. Photo credit: Lianna Nixon 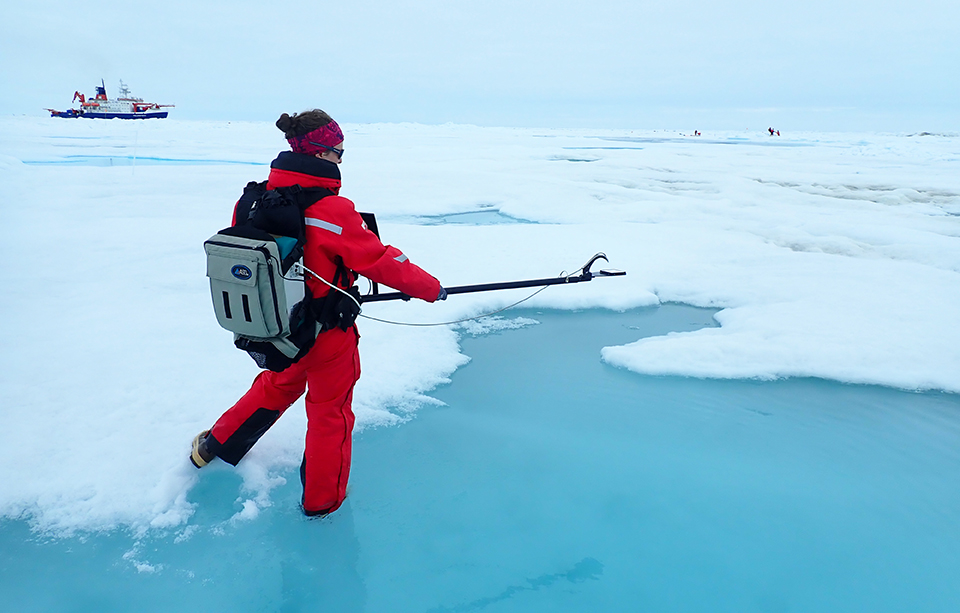 CEE alumna Madison Smith takes measurements of how much sunlight is being absorbed versus reflected (called the albedo) by different surface types, which helps explain the sea ice melt process. Melt ponds like that shown here absorb more energy than the ice and enhance melt. Photo credit: Amy Macfarlane

Back in Seattle, Smith has resumed her post-doctoral research, which entails analyzing data from the expedition. In addition to monthly meetings with the larger MOSAiC team to discuss data processing and pertinent findings, Smith continues to work closely with the sea ice team. She will also be collaborating with the National Center for Atmospheric Research in Boulder, Colo., to utilize the data to improve climate models for enhanced long-term predictions in the Arctic.

“We will put together stories of what we think is interesting and hopefully will have impacts for the Arctic science community,” Smith says. “To be part of such a large, collaborative, interdisciplinary expedition was unlike anything I’ve ever done.” 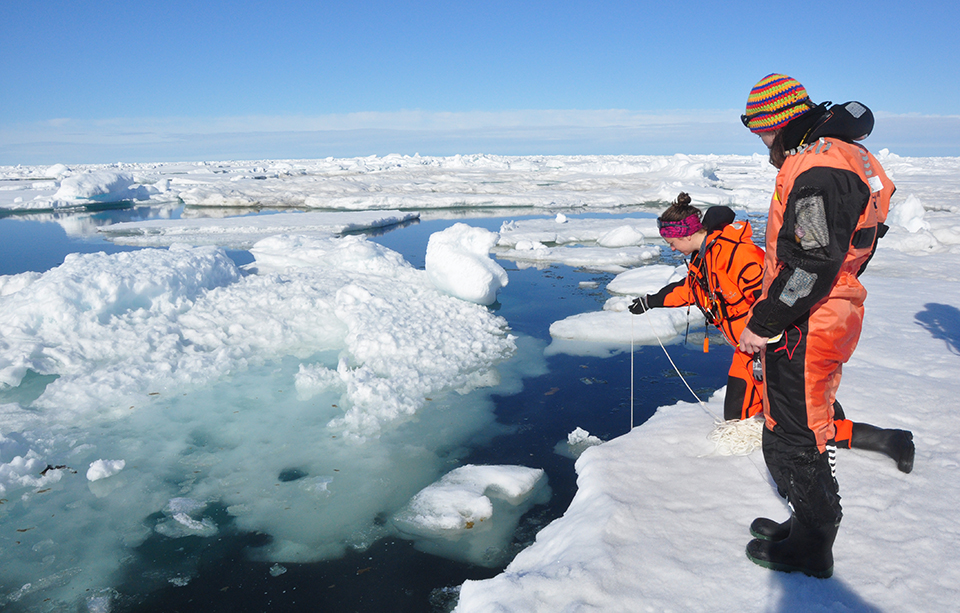 CEE alumna Madison Smith takes quick measurements of temperature and salinity in the water with biogeochemist Debbie Bozzato from the University of Groningen. The strong gradients in temperature and salinity near the surface have many implications for the biology that thrive in the water during the 24-hour daylight in the summer. Measurements of this layer throughout the summer will be used to improve climate models. Photo credit: Melinda Webster