Just as salmon swim against the current, a team of researchers faced a difficult journey on their quest to answer a decades-old problem: what causes the death of coho salmon that are exposed to stormwater runoff?

After five years, the UW-led research team has successfully traced the previously unexplained coho salmon mortality to a formerly unknown chemical that is a byproduct of an industrial chemical widely used to preserve rubber tires— of which three billion are produced annually around the world.

“Just like food needs preservatives so it doesn’t spoil, this chemical is put in tires so ground-level ozone doesn’t degrade them,” says lead researcher Edward Kolodziej, an associate professor in Civil & Environmental Engineering (CEE) and the UW Tacoma Division of Sciences & Mathematics. “The tires wouldn’t last as long if the preservative chemical wasn’t there.”

The researchers published their findings in the journal Science in December 2020. The interdisciplinary research effort extended across Washington state and Canada, with collaborators from the University of Washington Tacoma and Seattle campuses, the Center for Urban Waters at UW Tacoma, Washington State University (WSU) Puyallup, the University of Toronto, the San Francisco Estuary Institute and the Southern California Coastal Water Research Project. Also assisting in the effort were CEE associate professor Michael Dodd and CEE graduate students Haoqi Zhao, Ximin Hu and Huan He.

“We are dealing with an acute toxicant here, something that is lethal in the water and kills large fish quickly,” says Kolodziej. “What we found applies to every busy road in the world as far as we know.”

For more than 20 years, researchers throughout Puget Sound have been perplexed by the unexplained death of adult coho salmon, which occurs in urban streams when the fish return to spawn.

“Everyone was telling me about stormwater and how coho died and they didn’t know why,” says Kolodziej, who joined CEE in 2014 as part of the UW Freshwater Science Initiative. “This seemed like the perfect type of problem to apply our technical expertise to.”

The phenomenon often occurs after heavy rainfall, when runoff from roadways heads into waterways, transporting toxic substances and chemicals from fertilizers and pesticides to antifreeze and heavy metals from cars. The stormwater is so toxic that coho salmon often die within a few hours. In urban watersheds located in close proximity to roadways, studies show that more than 90% of salmon may die before spawning.

It’s not yet known how widespread the problem may be. Although coho salmon are found throughout the North Pacific Ocean and are abundant in coastal areas from Alaska to California, the majority of current data and observations are from Washington state. In preliminary testing of stormwater samples from urban areas in California, the toxicant was also identified at lethal concentrations. 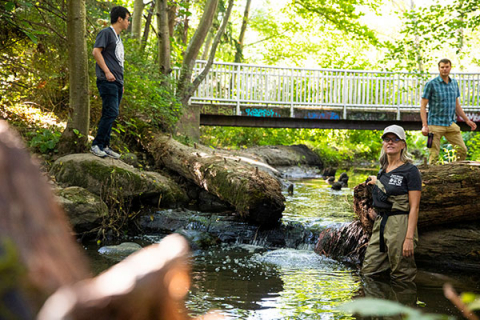 Narrowing 2,000 chemicals to one

Based on previous studies, the researchers suspected the toxicant was related to tire and road wear particles, which were consistently found in water samples from urban streams with a history of coho salmon mortality.

Although identifying a single chemical toxicant may sound like a straightforward task, tire and road wear runoff contains more than 2,000 chemicals. Starting with this “toxic chemical soup,” the researchers used a process called fractionation to separate the complex mixture into increasingly smaller parts based on differences in chemical properties. Once they identified a reasonable number of suspected toxicants, they exposed fish to the chemicals, but they failed to induce mortality.

The researchers continued to use fractionation until they identified a single unknown compound, which appeared as a small pink-red crystal. Because they were unable to trace the compound back to any known chemicals, the researchers began to consider that it may be a chemical byproduct.

They eventually linked the unknown chemical to an industrial chemical, 6PPD, which is widely used as an antioxidant to preserve rubber tires. The toxicant is produced when 6PPD reacts with atmospheric ozone, a ground-level gas created by photochemical reactions involving pollutants such as vehicle exhaust and gasoline vapors. It is during the reaction of ozone with 6PPD that 6PPD-quinone is produced, which is toxic to coho salmon.

“It was a pretty hard task, so I won’t say there was just one breakthrough,” says lead researcher Zhenyu Tian, a research scientist at the Center for Urban Waters at UW Tacoma. “This chemical is a transformation product more dangerous than the parent compound.” 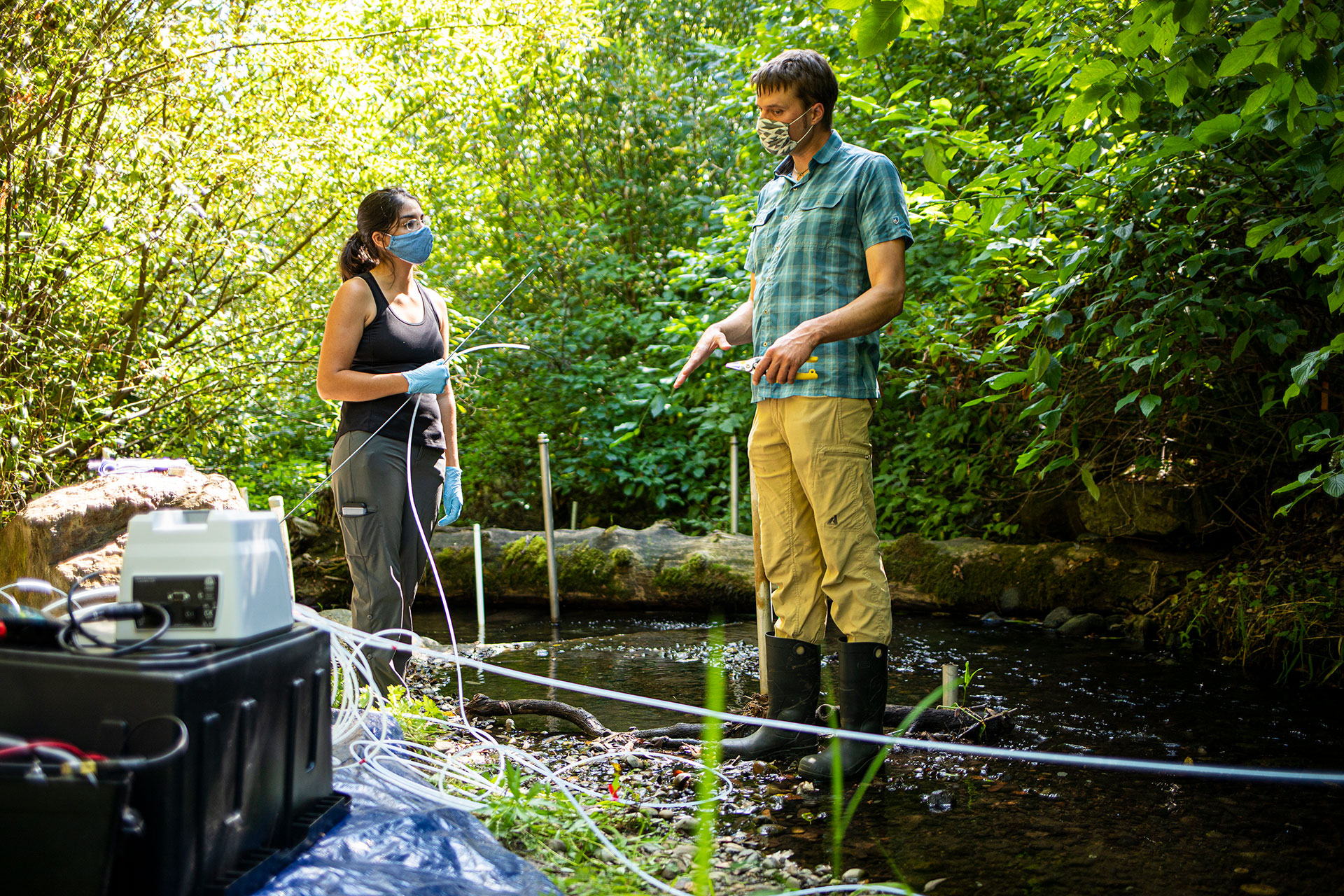 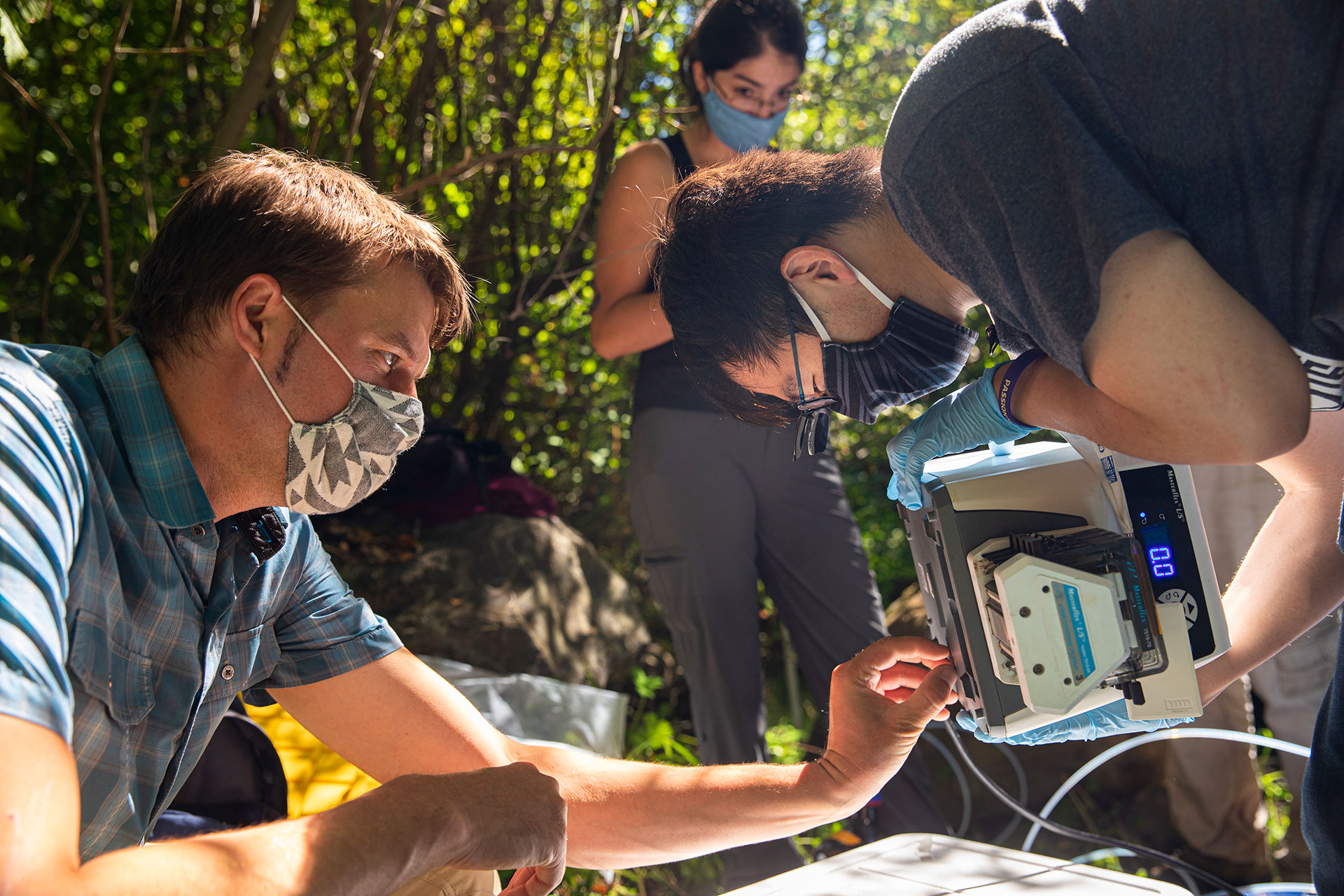 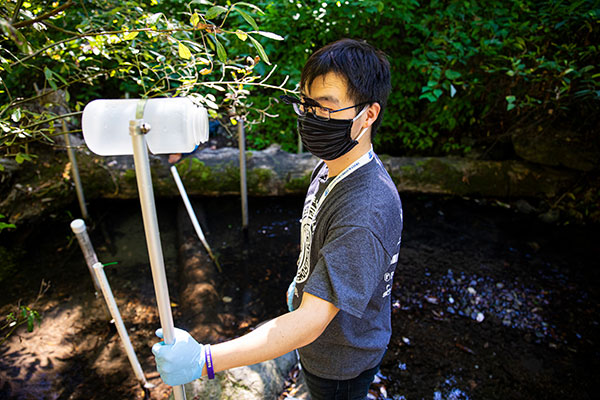 The researchers’ next step was to confirm the identity of the unknown compound. Typically, this is achieved using a commercial standard.

“But that commercial standard didn’t exist in this case,” says CEE associate professor Michael Dodd. “So, we worked with Ed’s group to generate a standard that helped to confirm the identity of the toxicant compound.”

The synthetic standard served two functions. It was sent, together with the pure isolate, to the University of Toronto, where researchers confirmed the chemical structures matched. The synthetic standard was also used to evaluate fish toxicity in laboratory tests led by assistant professor Jen McIntyre from WSU Puyallup. During a fish exposure in February 2020, both the synthetic standard and naturally occurring toxicant induced mortality in coho salmon in fewer than five hours.

“By comparing the mortalities in the fish toxicity tests, it was confirmed that the lab derived standard elicited the same response as the toxicant isolated from tire particle leachate,” Dodd says. “This was an important part of confirming the identity of the toxicant compound.”

The researchers speculate that relying only on current stormwater treatment methods to keep 6PPD-quinone out of urban waterways will be difficult due to the vast quantity of stormwater. Rather, they suggest source control as a probable long-term solution and have initiated contact with tire companies and regulatory agencies.

“Tires need antioxidants to make them last and make them stronger. It’s just a question of which chemicals should be used and carefully evaluating their safety for humans and aquatic organisms,” Kolodziej says. “Chemists have many tools to figure out a safer alternative.”

The researchers continue to investigate the toxicant to answer questions such as how fast the compound forms at various ozone levels and the concentration required for toxicity.

“This is the first thing I’ve worked on in my career where I’m not sure where the story ends,” Kolodziej says. “It has been intellectually interesting — I’m waking up at night wondering how many species it impacts.”

Help support continued research at UW Tacoma’s Center for Urban Waters, which is dedicated to improving urban water quality in the Pacific Northwest and protecting the future of Puget Sound.