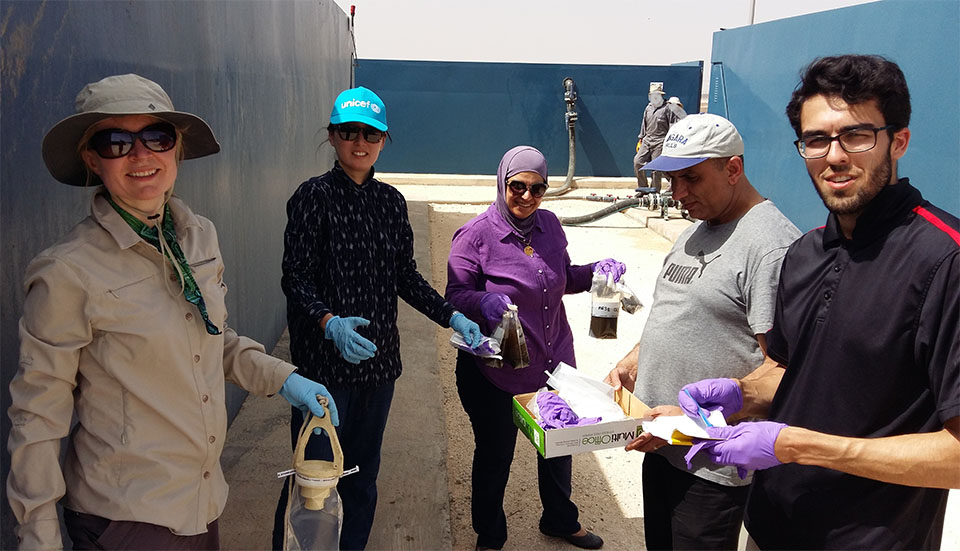 It’s an oxymoron of sorts: better refugee camps. But despite contradictory terms, a team of CEE researchers is working to improve wastewater treatment systems at refugee camps, which are typically constructed quickly to accommodate people displaced by both natural and man-made disasters.

To achieve this goal, the researchers are investigating the Azraq Refugee Camp in central Jordan, which they visited four times this past year. Currently housing more than 45,000 refugees from the Syrian Civil War, preparations are underway to more than double the size of the camp, which consists of row after row of small white cabins situated in a remote area. The camp has the potential to become one of the largest refugee camps in the world.

“Our goal is not to improve this camp; there are engineers working on that. We are focused on a bigger picture goal. Our work will help the next camps that are set-up,” said CEE research assistant professor Heidi Gough.

Led by Gough, the project is a collaborative effort that includes CEE faculty Amy Kim, graduate students Chris Callahan and Heta Kosonen, and faculty and students from the Jordan University of Science and Technology (JUST). During the team’s week-long visits to the camp, they work at the JUST host campus, departing early in the morning to travel several hours via escort to the camp.

“Often we get on the plane not knowing if the permits for camp entry have been approved. The officials are cautious about letting people into the refugee camp,” Gough said. “Our partners at UNICEF, who are very interested in our work, have been incredibly efficient in making sure that we get the access we need to get our work done.” Wastewater is an increasingly critical, and often overlooked, element of refugee camps, as water must be properly treated before being released back to the environment in order to prevent health hazards for both people and wildlife. Modern wastewater treatment facilities are almost unheard of in refugee camps, due to limited budgets and lack of time to establish proper facilities. The Azraq Refugee Camp is unique, therefore, as it is the second refugee camp in the world to use a modern wastewater treatment system. Most refugee camps simply use pit latrines and cesspools.

Within the refugee camp, neighborhood blocks contain showers and wash stations designed to serve 16 families each. The wastewater is pumped every 2-3 weeks and transported by truck to the wastewater treatment plant, located inside the camp boundaries. Eventually, the treated wastewater will be repurposed for agricultural uses in the arid region. With limited financing for a wastewater system, decommissioned reactor units were recovered from a United Nations base in Afghanistan and shipped to the camp, where they were refurbished. Once the reactor units were capable of holding water, a fixed-film biological treatment process was implemented to remove carbon and nitrogen and to separate solids from the wastewater.

The researchers do not directly interact with the refugees at the camp, but spend their time at the nearby wastewater treatment facility where they conduct interviews with the staff at the facility, make field observations and collect water samples.

“The more information and data we can gather and publish, the easier it will be for future disaster response teams to cultivate a plan that works for their wastewater needs,” graduate student Chris Callahan said.

A few key findings that have surfaced are the need for a contingency plan to accommodate additional wastewater, pipes that can be easily reconfigured and well-trained wastewater facility staff. With limited Internet and cell phone service at the camp, the researchers are also exploring recommendations for enhanced communication.

The researchers are currently compiling their data and plan to soon publish their findings. The research is funded by a National Science Foundation Rapid Response Research grant, in partnership with UNICEF, which oversees water sanitation at the camp.