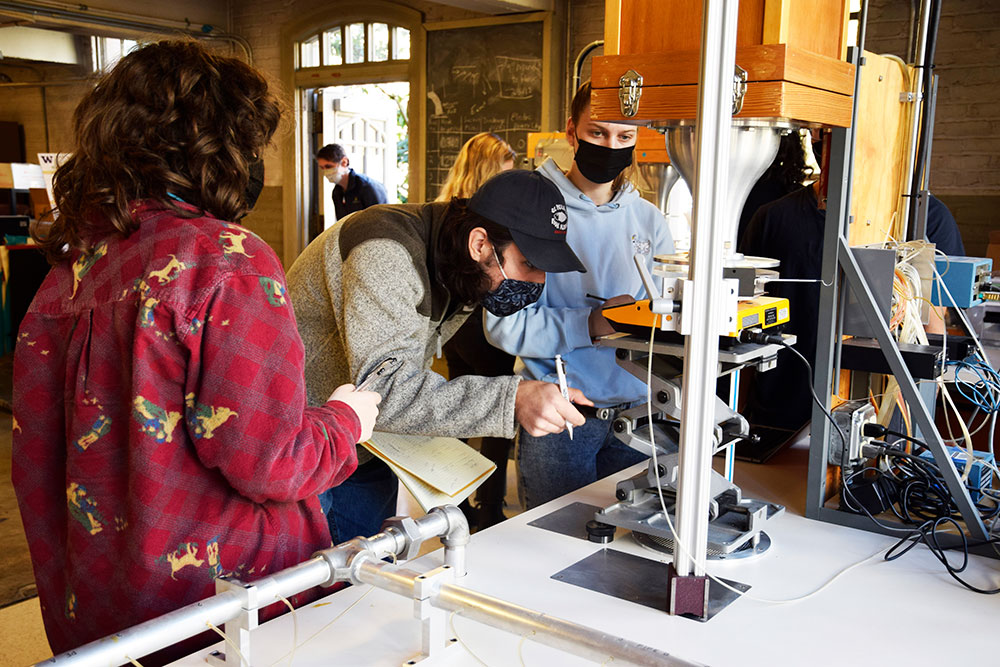 During an introduction to fluid mechanics (CEE 347) lab where students learn to measure the force of an air jet, junior Ingrid Phillips (left) watches junior Daniel Tsukada (center) adjust the height of the force scale. The students are gathered around one of three air flow benches relocated to the renovated lab space.

Things are flowing much better in the CEE fluids lab, located in the 100-year-old Harris Hydraulics Laboratory, following a substantial renovation project. Completed just in time for autumn quarter, the project enhances the student experience through the addition of more hands-on workstations as well as flexible teaching space.

“Now we have smaller groups of two to four students working on experiments,” says Professor Alex Horner-Devine. “It’s a big shift to move to something where everyone gets their hands wet and is participating rather than watching.” 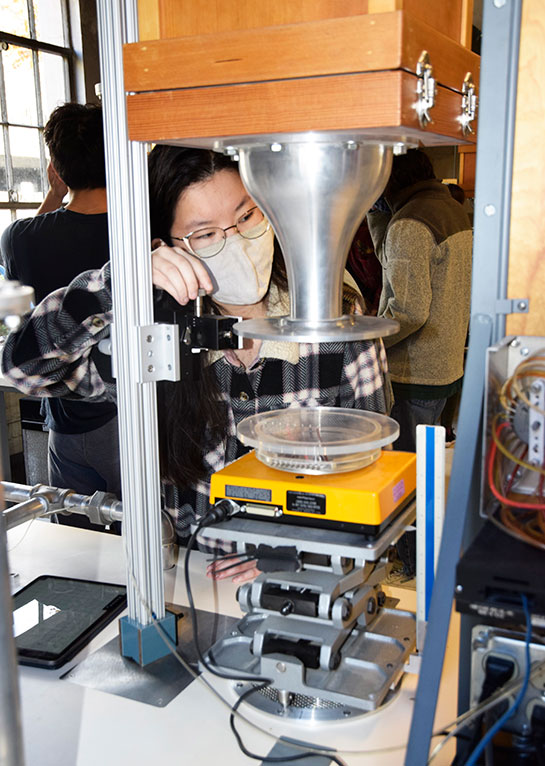 In the newly renovated Harris Hydraulics Lab, junior Nelly Sunstrum positions a pitot tube to measure the speed of air in the jet.

Prior to the remodel, up to a dozen students gathered around a single experiment during lab sessions. Now, the renovated space features four water flow benches, four small water flow channels and three air flow benches. Adjacent to the lab space is a flexible teaching area, where students are led through the theory they will be testing in the lab experiments.

“This is the biggest renovation since I’ve been here,” says Horner-Devine, who has been teaching fluid mechanics courses at the UW for 17 years. “Another key thing about the space is that whereas it used to be just CEE undergraduate space, it is now College of Engineering (COE) instructional fluid mechanics space.”

The renovated lab space will be utilized across CEE, Mechanical Engineering and Aeronautics & Astronautics. Funded by the COE, the remodel project was undertaken as part of a renewed focus on investing in undergraduate teaching spaces as well as enhancing collaboration across departments.

Located on the south end of campus, the Harris Hydraulics Laboratory was constructed in the 1920s to house hydraulics research facilities. Minor renovations have been completed over the years, and an addition to the building was completed in 1959. The building is now utilized by several UW departments.

“Although we have lost the ability to observe some things at full scale, we’ve gained the ability for students to experiment with flow behavior and change flow settings like they couldn’t before,” says Horner-Devine. “Now, more students are involved in solving problems during lab experiments.”