A new wave of research

Working to understand the chaotic nature of tsunami debris

Making sense of chaos isn’t an easy task, but a team of CEE researchers is up for the challenge. With an elevated risk of a tsunami event in the Pacific Northwest, the researchers are working to better understand how debris collectively causes tsunami-induced damage in coastal communities.

“The idea we came up with was to really embrace the chaos of the event and the fact that debris is rarely a single shipping container. It’s usually a house that has separated into its individual components or a parking lot full of cars,” says CEE Associate Professor Mike Motley. “We are looking for ways to quantify something that is random and amorphous.”

The research is timely, with a major subduction zone earthquake predicted for the Pacific Northwest, which could trigger a tsunami along the Washington coast, extending up into British Columbia and down into California. The Cascadia Subduction Zone, which last ruptured in A.D. 1700, is active roughly every 300-600 years.

“It’s a very urgent concern. There have been tsunamis in Chile, American Samoa, Indonesia and Japan. We are the one area that hasn’t been directly impacted in the past 20 years,” Motley says. “The interesting thing here is we get one shot — once the subduction zone event occurs, it resets and we wouldn’t expect to see another event for several hundred years.”

To ensure that structures are designed to withstand a tsunami event, the researchers’ goal is to inform the tsunami building codes used in the United States. Now in its second year, the three-year National Science Foundation-funded project is led by Motley in collaboration with CEE Professors Pedro Arduino and Marc Eberhard. Also involved are graduate students Nikki Lewis, Dakota Mascarenas, Justin Bonus and undergraduate students Abbey Serrone and Haley Herberg. 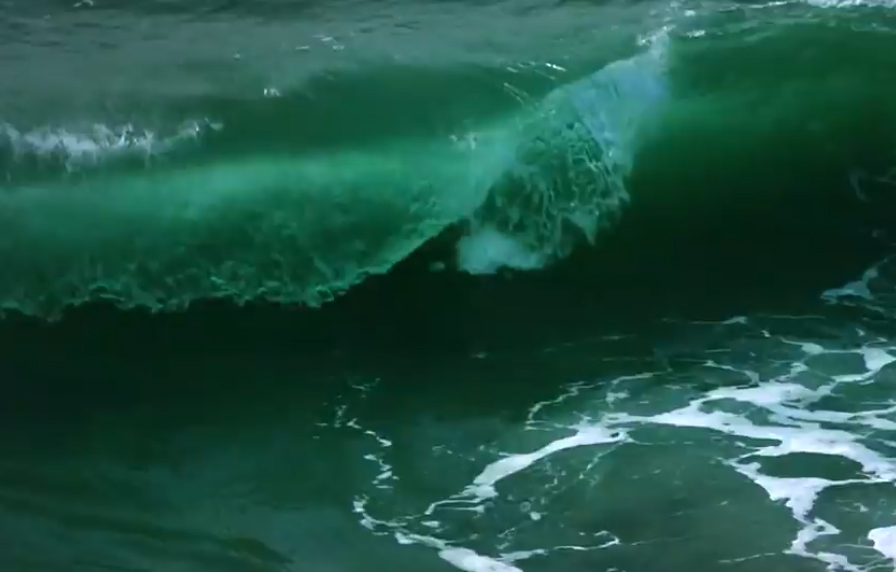 Joining forces with waves and water, debris can cause major damage during a tsunami. While existing research details how a single piece of debris impacts the built environment during a tsunami, there is a gap in understanding how different types of debris, called a debris field, interact with structures simultaneously.

“If you look at any tsunami event, the flow itself isn’t comprised of only water, but everything the tsunami picks up when it goes through an area. Debris can include trees, collapsed buildings, vehicles and fixtures,” says Ph.D. student Nikki Lewis. “Anything that can be swept away in a flow and transported to a different location can cause damage to another structure.”

To learn how different types of debris act together to cause damage during a tsunami, the researchers are investigating the collective forces in a debris field. They are also exploring a phenomenon called damming, which occurs when debris collects in an open space, such as between two columns on a bridge. This creates a dam that causes additional debris and fluid to accumulate, which may cause the structure to give way — and potentially join the debris field. 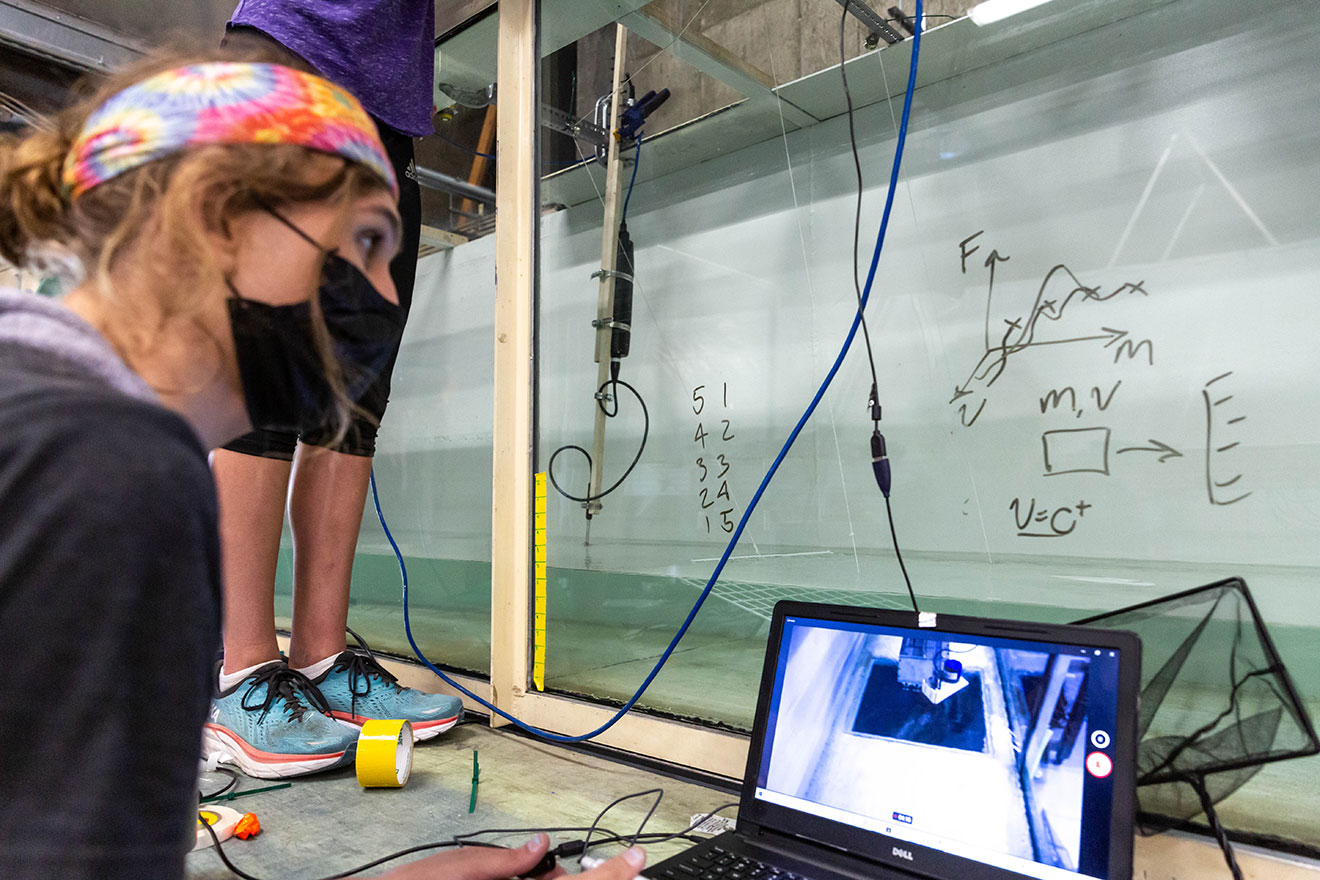 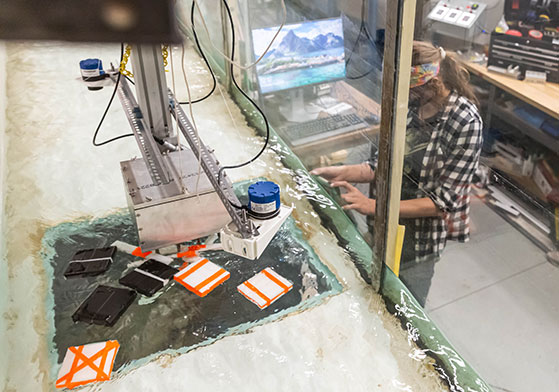 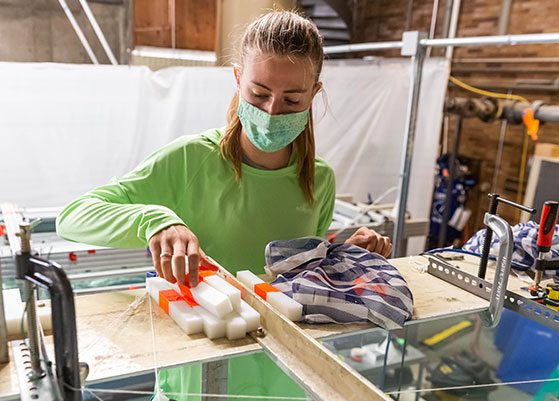 Left: Ph.D. student Nikki Lewis watches video from an overhead webcam in the wave flume that offers a better view of the lateral movement of debris. Top right: A field of debris of various shapes impacts the test specimen and accumulates, creating a damming force. Bottom right: Undergraduate student Haley Herberg organizes debris for future tests. To study the effect of geometry and mass when the debris strikes the specimen, the debris was cut into various thicknesses and lengths.

By conducting repetitious experiments with slight variations, the researchers hope to identify patterns that emerge. During the course of 10 weeks, more than 400 trials were conducted in a wave flume that simulated tsunami-like waves at Oregon State University’s O.H. Hinsdale Wave Laboratory in spring 2021.

“If you take one piece of debris, it is easy to quantify the ways it impacts something, but there are a lot of ways numerous pieces of debris can orient themselves,” Motley says. “So, we tried to do as many realizations as we could, to look at how much randomness we would get and the disparity of results for tests that are to some extent the same.”

During the experiments, which ran continuously in 15-minute increments, rectangular debris blocks were lowered into a wave tank. Once released, a tsunami-like wave carried the debris toward an instrumented box equipped with sensors and other technology to measure the impact of the debris. The researchers used debris of varying sizes and quantity and arranged them in different configurations, from random to organized. The velocity of the waves also varied.

“If you envision a house that collapsed during a tsunami event, what remains could affect other structures in a random assortment of impacts. And so we tested configurations with various parameters, including how tightly packed the debris field was,” says master’s student Dakota Mascarenas, who led the experiments.

Subsequent experiments were conducted at the UW’s Harris Hydraulics Lab this autumn, as the researchers evaluated the facility’s capabilities in preparation for additional trials in the coming year.

“The idea moving forward is to have thousands of pieces of debris that can be introduced into the flume and will be representative of a tsunami-like event,” Motley says. “We hope to model the actual physical tsunami a little better on a smaller scale.”

Identifying trends and patterns in the preliminary data will enable the researchers to begin building computer models capable of predicting how a debris field will interact with structures during a tsunami.

“We are already starting to see some trends shake out, such as trends based on the amount of debris that we put in the flume and the orientation of the debris field,” Motley says.

Considering the complex nature of a debris field, the researchers will combine multiple modeling methods: high fidelity fluid models that explore how water flows around rigid shapes and material point models that evaluate how objects interact in a fluid flow. The modeling work will be undertaken in collaboration with the Natural Hazards Engineering Research Infrastructure SimCenter at University of California, Berkeley. In addition to predicting tsunami damage, the models will also help answer pressing questions, such as pinpointing what caused the ultimate failure of a structure — the tsunami or the earthquake.

“We are on a quest for understanding,” Lewis says. “We want to ensure that design guidelines are suitable for future tsunamis, which are so chaotic and unpredictable that it’s hard to intuitively say what will happen.”

Read about other structural engineering and mechanics research taking place across CEE.