It may be impossible to predict when a magnitude 9 (M9) earthquake may strike the region, but UW civil and environmental engineering researchers have succeeded in predicting a crucial detail: the likelihood that bridges in Western Washington will be passable following such an event.

New research reveals that although there is predicted to be widespread damage to bridges close to the fault region, which runs along the western side of the Olympic Peninsula, as well as some bridges situated in sedimentary basins that underlie Seattle and much of the Puget Sound region, bridges outside these areas are likely to be operational.

“We found that the damage to bridges is much lower than expected — for the vast majority of bridges in the region, we think they will be just fine,” explains CEE Professor Marc Eberhard, who led the research. “On the Olympic Peninsula, there will be a lot of bridge damage for sure, but by the time it reaches Seattle, the earthquake is likely to cause less destruction.” 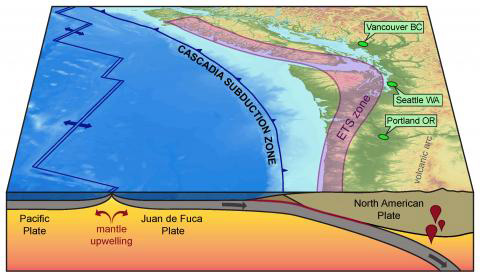 The Cascadia Subduction Zone is a fault that is located off the Washington and Oregon coasts. The fault separates the North America and Juan de Fuca plates, one of which is slowly moving beneath the other. Image is courtesy of the U.S. Geological Survey.

While most earthquakes last for 10-20 seconds, a M9 earthquake is unique, estimated to last two minutes or more. Located off the Washington and Oregon coasts, the Cascadia Subduction Zone (CSZ) is a fault that runs from Vancouver Island, B.C., to Cape Mendocino, Calif. Capable of reaching 9.0 magnitude, the CSZ last ruptured in the year 1700. These types of earthquakes occur roughly every 500 years.

“For the whole region, the M9 is the one that is characterized as shutting down the west part of the state, but that’s not likely. I’m more worried about a Seattle Fault earthquake, but those only occur every 2,000 years, ” says Eberhard, referring to the fault running east-west through the middle of the city. 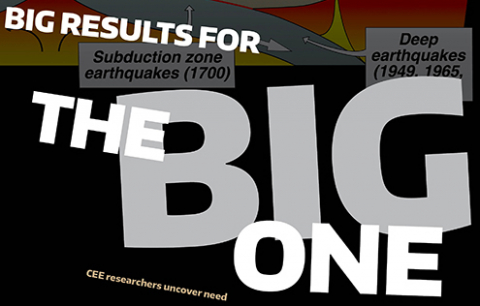 Most people know that the Pacific Northwest is overdue for a catastrophic earthquake. But they may not know that CEE faculty are actively working to reduce the consequences.

Three years in the making, the report “Impacts of Cascadia Subduction Zone M9 Earthquakes on Bridges in Washington State” draws on the expertise of Eberhard, as well as faculty Jeffrey Berman and Brett Maurer. Also assisting with the effort were graduate students Zachary Kortum and Kan-Jen Liu. The research is  a continuation of a 2019 study that investigated the effects of simulated M9 ground motions on tall reinforced concrete buildings. Enabled by access to the latest simulation data and models, the researchers wanted to help prioritize earthquake retrofit efforts and inform emergency response plans. A report from the U.S. Department of Homeland Security previously estimated that 80% of bridges in Western Washington state would be inoperable following an M9 earthquake.

“We anticipated that the damage we were predicting was likely to be less than previous studies have shown,” Berman says. “I don’t think we were super surprised at any of the outcomes necessarily.” 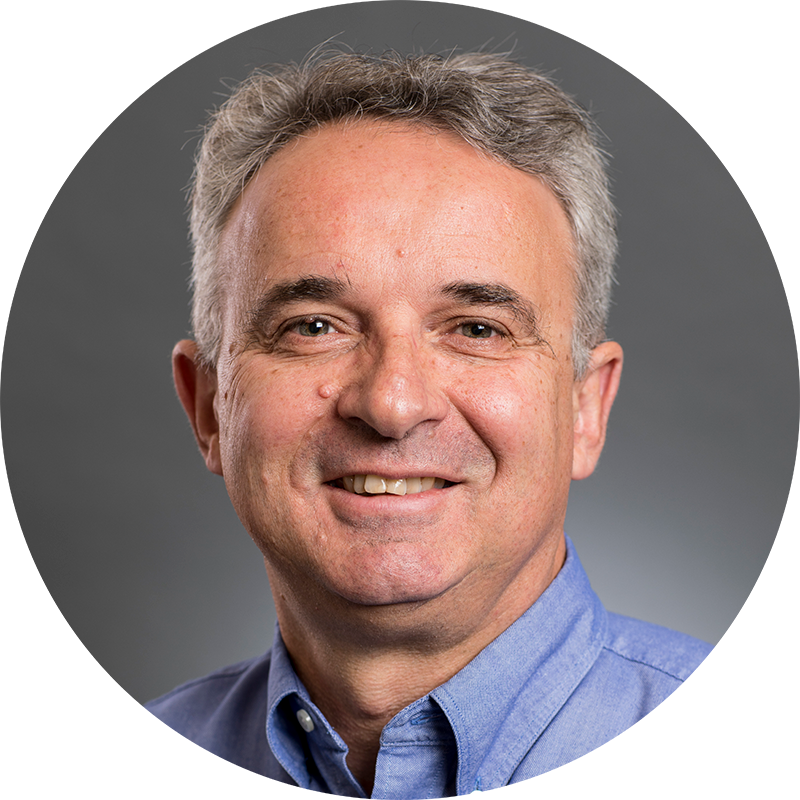 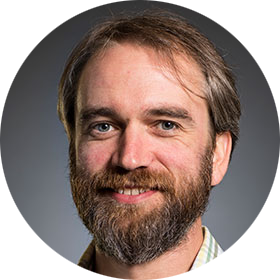 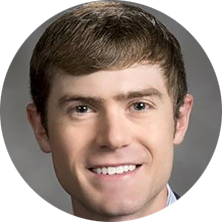 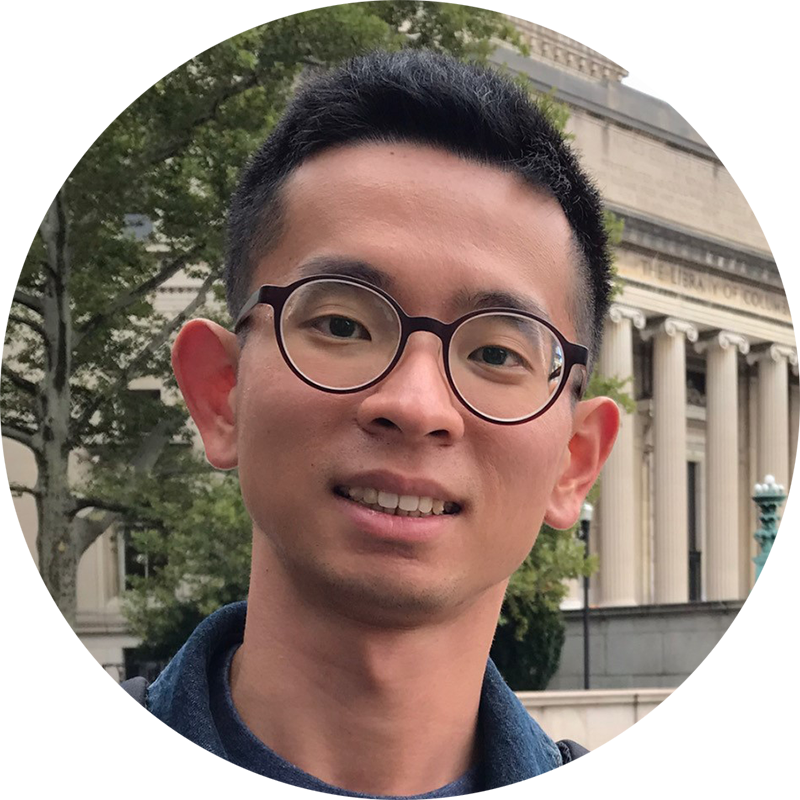 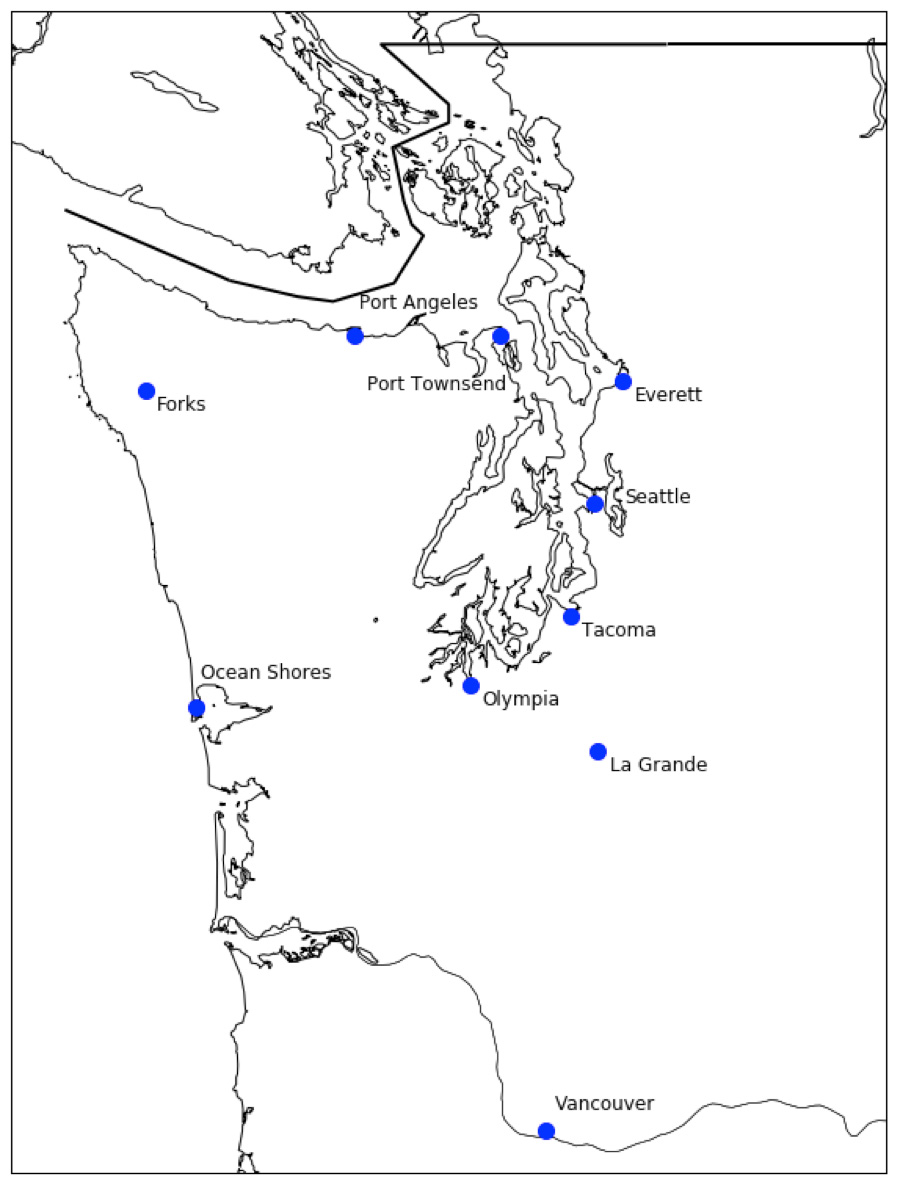 Locations of the ten cities selected for the study. Credit: De Zamacona 2019

With more than 500 bridges alone along major routes extending from Olympia to Everett, the researchers focused their efforts on 10 specific locations in Western Washington. The sites were selected to reflect a variety of distances from the fault as well as depths of sedimentary basins. Until now, previous damage assessments of bridges haven’t taken into account the effects of sedimentary basins that underlie much of Puget Sound, which are capable of amplifying seismic waves in certain conditions.

To inform the study, the researchers relied on a database compiled by WSDOT, which specified key parameters for hundreds of bridges located along major Puget Sound highways. About three quarters of the documented bridges were constructed before 1976, when significant changes were made to earthquake design codes following the San Fernando earthquake in 1971.

To measure the level of estimated damage to bridges in the event of a M9 earthquake, the researchers developed models for typical bridges constructed both before and after 1976. The bridges are meant to be representative of a standard highway overpass, with unique bridges such as the Ship Canal Bridge and Aurora Bridge being outside the scope of the study. The models were then subjected to ground motions from 30 simulated baseline M9 scenarios, incorporating geological conditions for the 10 representative locations.

“It’s important to put a frame around what we studied — these bridges are a typical highway overpass that has a couple spans, a couple columns and is pretty standard,” says Berman. “It’s the typical bridge that you use as you drive on I-5 from SeaTac Airport to Tacoma.” 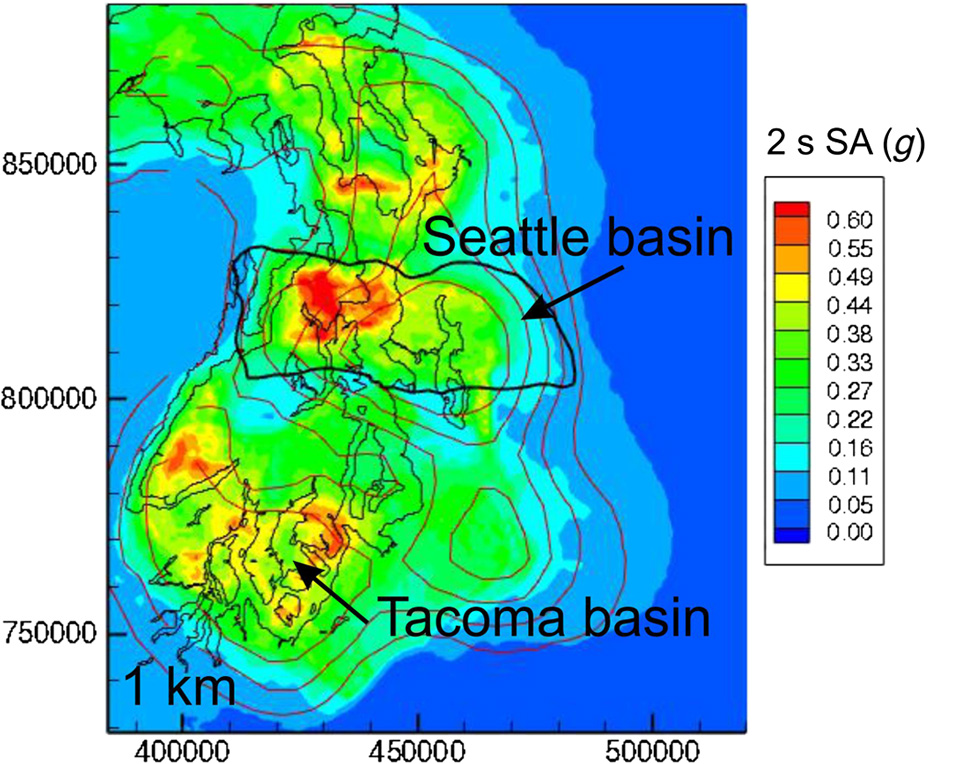 Spectral accelerations at longer periods were significantly amplified by the presence of sedimentary basins, as can be seen in the red, orange and yellow areas. The figure shows the log-average spectral accelerations at a period of two seconds for the Puget Sound region for the 30 M9 ground motions. Credit: Frankel et al. 2018.

Among the 10 locations, the results varied significantly. The estimated damage to bridges depended greatly on distance from the fault and whether the location was underlain by a sedimentary basin.

When evaluating the structural performance of the bridges, the researchers noted the “period” of the earthquake, which is the time it takes for seismic waves of energy to vibrate. Each location has a natural vibrating frequency, with hard bedrock having shorter periods than softer soils. While ground shaking usually decreases as the period elongates, it can actually increase inside basins, which amplify the seismic waves. Within basins, the damage to bridges is selective, dependent on the bridge’s own unique properties and resonance.

“Seattle is sitting on softer rock, which tends to make the ground motions go back and forth really slowly, and those are amplified in the basin,” Eberhard explains. “It’s bad for tall buildings and it’s also bad for bridges.”

In the study, moderate bridge damage was predicted for inland cities located in deep or shallow sedimentary basins. The presence of a basin was capable of amplifying ground motions between longer periods of about 1-2 seconds. Overall, the most damage was predicted for bridges in coastal cities, which are located close to the fault but don’t have basins. 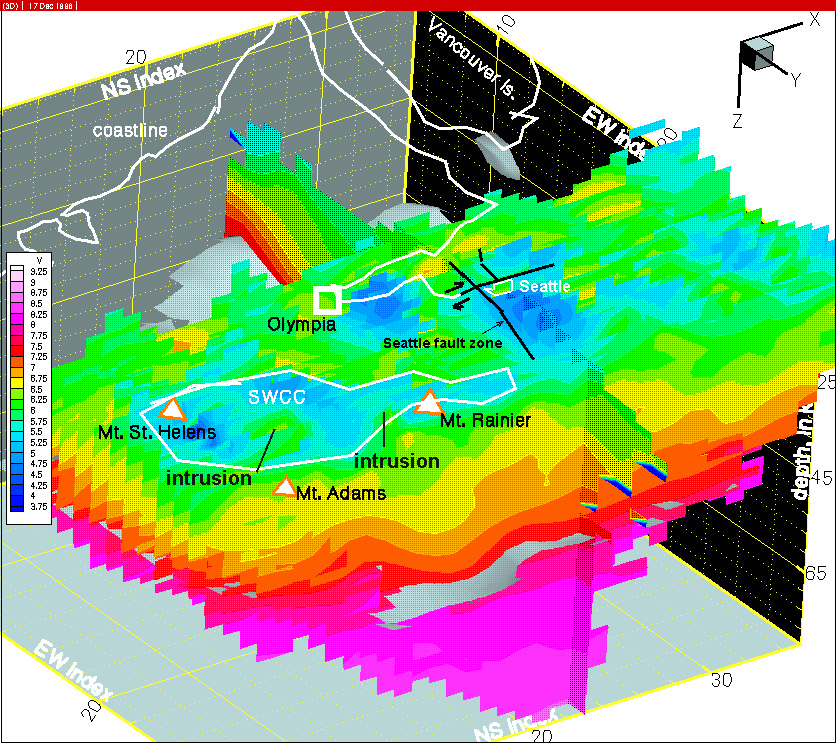 Blue areas identify the location of sedimentary basins in Western Washington. Image is courtesy of the U.S. Geological Survey.

To increase the resilience of Western Washington’s transportation networks, the researchers hope the study will help inform emergency response plans and seismic retrofitting efforts. They recommend prioritizing older bridges along the coast as well as bridges in sedimentary basins.

“There are about 8,000 bridges in Washington state, so how do you decide which ones to fix? We are trying to give WSDOT a sense of the level of damage and how to prioritize them,” Eberhard says. “In post-earthquake planning, some major bridges might be down, but there may be smaller ones nearby – and a small roadway is 100 times better than a helicopter.”

The team is already working on a third study, which aims to develop even more detailed models of bridges to better evaluate structural performance. The researchers plan to apply what they’ve learned to make predictions for specific bridges. They will also investigate the soil where bridges are located to better understand the role of liquefaction — when soil loses strength and behaves like a liquid during an earthquake.

“To predict liquefaction, we need to know what’s below the ground surface,” says Maurer, a geotechnical engineer lending his expertise to the project. “We will eventually be using an artificial intelligence tool to predict the subsurface where the bridges are located so that we can better determine the response to earthquakes.” 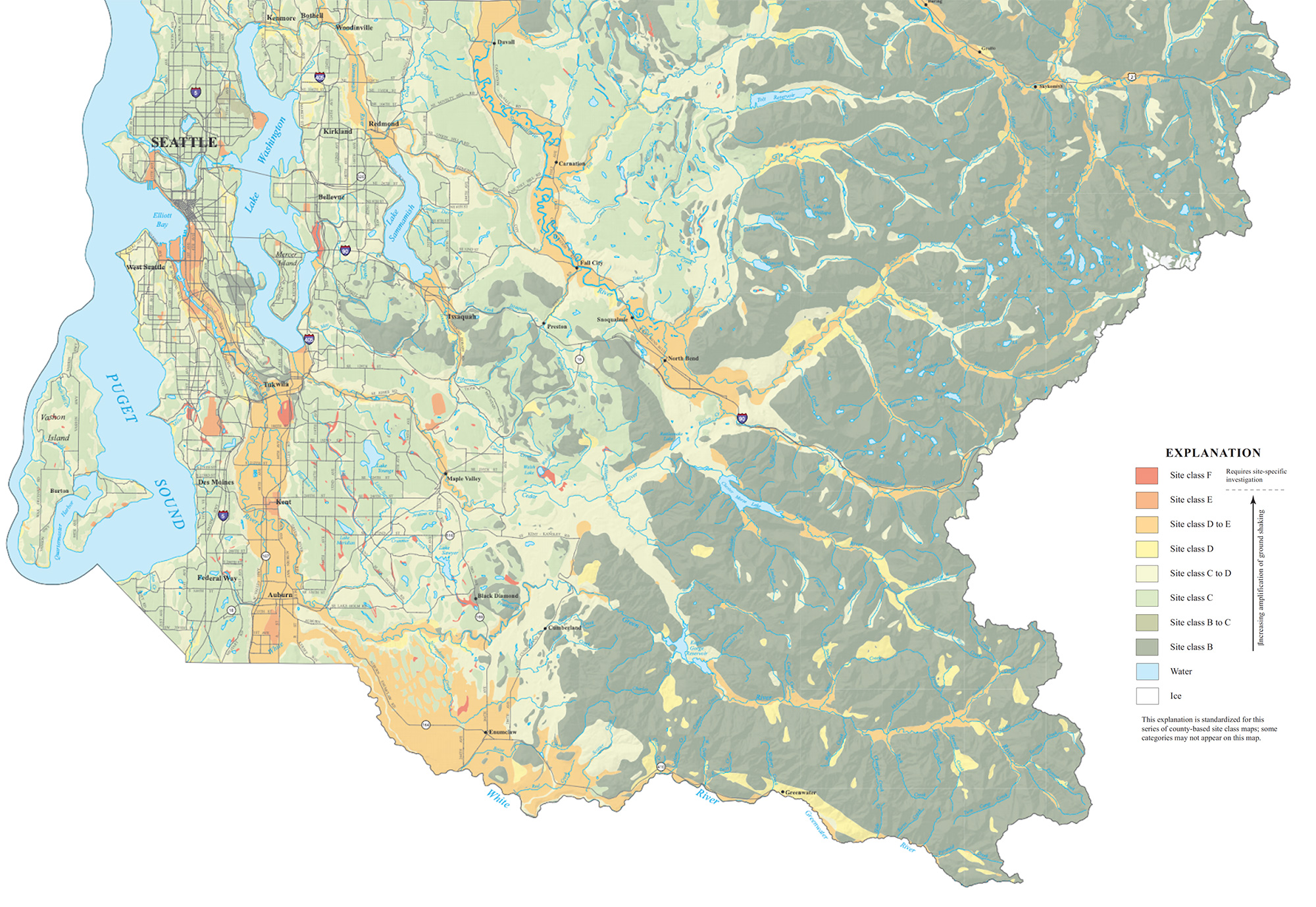 This map shows soil classifications for King County, which vary widely. Long portions of major highways in King County (I-5, I-90 and I-405) are located on softer soils. It was therefore necessary to adjust the baseline M9 ground motions to more accurately reflect local soil conditions in and around the Puget Sound region. Credit: Palmer et al. 2007